Merle Woo has worked as a spokesperson, teacher, poet and activist throughout her life.

Merle Woo was born to a Korean mother and Chinese father, Helene Chang and Richard Woo, in San Francisco on October 24, 1941. She grew up in San Francisco’s Chinatown with her mother, a clerical worker, and her father, a butcher and ginseng salesman. Helene Chang was born in Los Angeles, where her father worked as a ginseng salesman and traveling Methodist minister. The Changs immigrated to Shanghai, China, when Helene was little, but at ten they sent her back to the United States alone to live in an orphanage run by white missionary women. She ran away from the orphanage at age sixteen to start a different kind of life. After having an abusive first husband, she married Richard Woo, Merle Woo’s Chinese father. Richard Woo emigrated from southern China and entered the United States as a paper boy (using false documents.) He worked two full-time jobs most of his life.

Although they were not Catholic, Richard and Helene Woo sent Merle to Catholic schools, which they thought were better than public schools. Merle Woo earned her B.A. in English from San Francisco State University (SFSU) in 1965. She married while in college and later had two children, Emily and Paul. While pursuing an M.A. in English literature at SFSU, Woo witnessed firsthand the 1968–69 Third World Student Strikes at SFSU, which radicalized her politics. She speaks of being a beneficiary of such campus activism, because of the resulting establishment of ethnic studies, the Educational Opportunity Program (EOP), and affirmative action, which she believes helped her to get jobs. After finishing her M.A. in 1969, she started to teach in the Educational Opportunity Program at SFSU. During her years in the EOP, Woo attempted to make English learning more relevant to her students of color and began to incorporate Third World literature into her teaching.


This journal is friends only. This entry was originally posted at http://reviews-and-ramblings.dreamwidth.org/1313934.html. If you are not friends on this journal, Please comment there using OpenID.

Zachary E. "Zac" Posen (born October 24, 1980) is an American fashion designer. Posen lives in the neighborhood of SoHo with his boyfriend (since 2008) Christopher Niquet and their three dogs, Tina, Candy and Betty. Posen is Jewish, and in April 2012, Shalom Life ranked him Number 9 on its list of “the 50 most talented, intelligent, funny, and gorgeous Jewish men in the world."

Posen was born in New York City, and raised in the SoHo neighborhood of lower Manhattan. He is the son of Susan (née Orzack), a corporate lawyer, and Stephen Posen, an artist. His interest in fashion design started early, and as a child he would steal yarmulkes from his grandparents' synagogue to make ball dresses for dolls. He attended Saint Ann's School, a private school in Brooklyn, and in his sophomore year interned with fashion designer Nicole Miller. At age 16 he enrolled in the pre-college program at Parsons The New School for Design. He graduated from Saint Ann's in 1999. For three years Posen was mentored by curator Richard Martin at The Costume Institute of The Metropolitan Museum of Art. At 18, he was accepted into the womenswear degree program at London's Central Saint Martins College of Art and Design at the University of the Arts London. In 2001, Posen constructed a gown entirely made from thin leather strips and dressmaker hooks and eyes that was displayed by the Victoria and Albert Museum and featured in their "Curvaceous" exhibition.

In 2000, Posen received a big break after a dress he made for Naomi Campbell changed hands several times among several fashion insiders, including actress Paz de la Huerta. He is famously well-connected and has called Stella Schnabel his muse. Through Interview magazine Editor-in-Chief Ingrid Sischy, Posen met his future publicist and event producer Ed Filipowski, of KCD who offered to represent him for free.

Upon returning to New York in 2001, Posen set up an atelier in his parents' living room, while they gave him a USD$15 allowance. In October of the same year he was chosen to present a capsule collection as part of GenArt's Fresh Faces in Fashion New York 2001. He received a grant for USD$20,000. After his first runway show in 2001, Posen was courted by fashion titans Yves Carcelle (President of LVMH Fashion Group), Sidney Toledano (Chief Executive Officer and Director of Christian Dior S.A.), and Domenico De Sole (President and Chief Executive Officer of Gucci Group NV.) Following the success of this presentation, Posen established his design studio in Tribeca. Zac Posen continues to receive awards and accolades, most notably the Council of Fashion Designers of America's 2004 Swarovski's Perry Ellis Award for Womenswear. Posen’s strong, feminine aesthetic has become a favorite of style leaders including Natalie Portman, Rihanna, Amanda Seyfried, Kate Winslet, Claire Danes, Cameron Diaz, Jennifer Lopez, Mischa Barton, Beyoncé Knowles, and many more.

Zac Posen is an American fashion designer. Posen lives in the neighborhood of SoHo with his boyfriend (since 2008) Christopher Niquet and their three dogs, Tina, Candy and Betty. Posen is Jewish, and in April 2012, Shalom Life ranked him Number 9 on its list of “the 50 most talented, intelligent, funny, and gorgeous Jewish men in the world." On December 18, 2012, Zac was announced as official judge of Project Runway Season 11 which started on January 24, 2013 on Lifetime Television.

This journal is friends only. This entry was originally posted at http://reviews-and-ramblings.dreamwidth.org/3902749.html. If you are not friends on this journal, Please comment there using OpenID.

Vaughan was a writer, story editor and producer of the television series Lost during seasons three through five. He was nominated for a Writers Guild of America Award for Best Dramatic Series at the February 2009 ceremony for his work on the fourth season. The writing staff was nominated for the award again at the February 2010 ceremony for their work on the fifth season. He is currently the showrunner and executive producer of the TV series Under the Dome.

Wired describes Vaughan's comics work as "quirky, acclaimed stories that don't pander and still pound pulses". His creator-owned comics work is also characterized by "finite, meticulous, years-long story arcs", on which Vaughan comments, "That's storytelling, with a beginning, a middle, and an end. Something like Spider-Man, a book that never has a third act, that seems crazy." Erik Malinowski, also of Wired, has called Vaughan "the greatest comic book visionary of the last five years", comparing him to Frank Miller, Alan Moore, Paul Pope, and Steve Niles, and praised his addition to the TV series Lost as redeeming that series' third season.

Brian K. Vaughan was born in 1976 in Cleveland, Ohio, to Geoffrey and Catherine Vaughan. He grew up in Rocky River and Westlake. Vaughan and his older brother are both fans of writer Peter David, and according to Vaughan, their adolescent comics reading was largely defined by a shared love of David's 12-year run on The Incredible Hulk. Vaughn also cites Joss Whedon as the reason he wanted to become a writer, a decision he made while attending St. Ignatius High School, from which he graduated 1994. He then attended New York University to study film. While a student there, Vaughan took part in Marvel Comics's Stan-hattan Project, a class for fledgling comic book writers.

What would you do if a mysterious explosion left you with the ability to control machines? Become mayor of New York, of course. Mitchell Hundred gave up crimefighting years ago, and now fights evil with a pen and a mayoral seal. His mysterious power still comes in handy, though, especially when he can make the paparazzis' cameras jam or the neighbor's air conditioner stop rattling. But ever since his attempt to help fend off the September 11th attacks forced him to reveal his secret identity, things have gotten terribly complicated for Hundred. In this second volume we see him struggling with a political firestorm ignited by his open support of gay marriage at the same time that a mysterious presence is terrorizing New York's subways, leaving behind the horribly mutilated bodies of dogs and humans. Beside each gruesome discovery is a glyph linked to the explosion that gave Hundred his power. Vaughan (Y: The Last Man) and Harris (Starman series) have a created a compelling and completely original hero in Mitch Hundred. Ex Machina is half X-Files, half West Wing and 100% genius. The dialogue sparkles, the art beautifully conveys both Vaughan's horror and his humor, and the plot twists will have readers on the edge of their seats. For any fan of contemporary comics, Ex Machina is the series to read. Copyright © Reed Business Information, a division of Reed Elsevier Inc. All rights reserved.

This journal is friends only. This entry was originally posted at http://reviews-and-ramblings.dreamwidth.org/3902997.html. If you are not friends on this journal, Please comment there using OpenID. 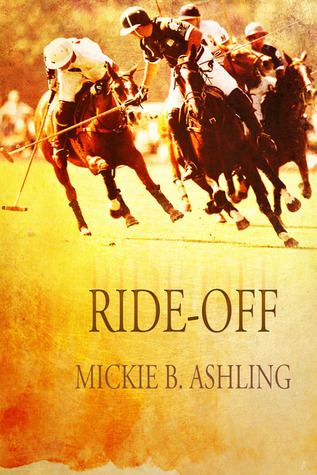 Ride-Off is the sequel to FireHorse. The release date for this title will be October 18th. Mickie B. Ashiling is giving away an ebook for comments on this blog.

About Mickie B. Ashling: Mickie B. Ashling is the alter-ego of a multifaceted woman raised by a single mother who preferred reading over other forms of entertainment. She found a kindred spirit in her oldest child and encouraged her with a steady supply of dog-eared paperbacks. Romance was the preferred genre, and historical romances topped her favorites list.
By the time Mickie discovered her own talent for writing, real life had intruded, and the business of earning a living and raising four sons took priority. With the advent of e-publishing and the inevitable emptying nest, dreams were resurrected, and the storyteller was reborn.
She stumbled into the world of men who love men in 2002 and continues to draw inspiration from their ongoing struggle to find equality and happiness in this oftentimes skewed and intolerant world.
Her novels have been called "gut wrenching, daring, and thought provoking." She admits to being an angst queen and making her men work damn hard for their happy endings.
Mickie loves to travel and has lived in the Philippines, Spain, and the Middle East but currently resides in a suburb outside Chicago.

Finally reunited, Preston Fawkes and Konrad Schnell put family and obligations aside, preferring to remain in seclusion on Ned’s estate to get reacquainted. Unfortunately, reality can only be held off for so long, and they return to Texas to reclaim the life they put on pause. Trying to strike the right balance between business, family, and romance requires ongoing effort, and the challenges begin shortly after they arrive.

At the top of the list is Bandi, Konrad’s son, and his desire to play polo. A close second is Conrad “Sasha” Fawkes, Preston’s actor son who’s struggling to succeed on Broadway. And last, but certainly not least, is Paloma, the fiery Argentinean beauty Preston sired after a passionate tango.

Blending the interests and needs of three grown children is difficult at best and almost impossible when agendas collide and old secrets are unearthed. The situation comes to a head when the family gathers in San Antonio for Thanksgiving, throwing Preston and Konrad into a maelstrom they must weather as best they can, or they’ll face a major ride-off that could throw the game before it even starts.

This journal is friends only. This entry was originally posted at http://reviews-and-ramblings.dreamwidth.org/3903277.html. If you are not friends on this journal, Please comment there using OpenID.