Darren Everett Criss (born February 5, 1987) is an American actor, singer-songwriter, multi-instrumentalist, and composer. One of the founding members and co-owners of StarKid Productions, a musical theater company based in Chicago, Illinois, Criss first garnered attention playing the lead role of Harry Potter in StarKid's musical production of A Very Potter Musical. The theater troupe made Billboard history when Me and My Dick became the first charting student-produced musical recording, debuting at number eleven on the Top Cast Albums chart in 2010.

Criss is best known for his portrayal of Blaine Anderson (2010–present), an openly gay high school student, on the Fox musical comedy-drama series Glee. As the lead vocalist of Glee's Dalton Academy Warblers, Criss' first number, a cover version of "Teenage Dream", became the fastest-selling Glee single, reached number eight on the Billboard Hot 100, and was certified gold in the U.S. The Warblers have sold over 1.3 million tracks, and the soundtrack album, Glee: The Music Presents the Warblers (2011), peaked at number two on the US Billboard 200.

In January 2012, Criss made his Broadway debut, starring as J. Pierrepont Finch in the revival of How to Succeed in Business Without Really Trying. His stint there proved to be a success: apart from Daniel Radcliffe's final week, the musical had the three most lucrative weeks of its 11-month run with Criss in the lead role, grossing more than four million dollars. In September 2012, he made his feature film debut in the comedy Girl Most Likely.

Criss is an advocate for LGBT rights, and is an active supporter of The Trevor Project, the leading national organization focused on suicide prevention efforts among lesbian, gay, bisexual, transgender and questioning (LGBTQ) youth. Criss is the recipient of Variety's Power of Youth Philanthropy award for his contributions to The Trevor Project. 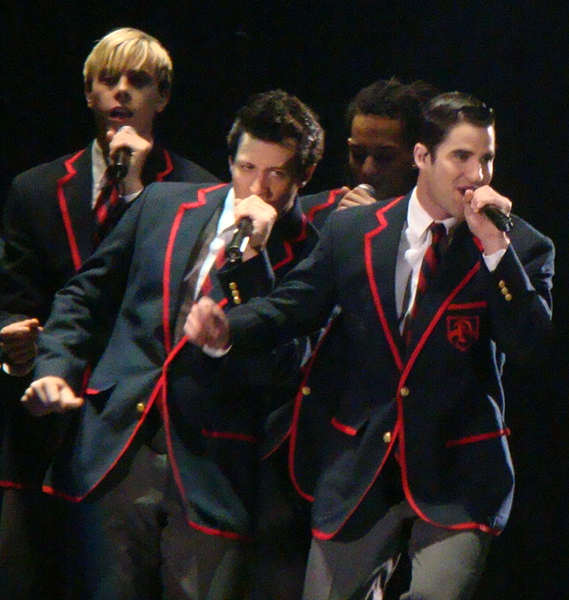 @vagueonthehow. Darren Criss and the Dalton Academy Warblers performing on the Glee Live! In Concert! tour in June 2011


This journal is friends only. This entry was originally posted at http://reviews-and-ramblings.dreamwidth.org/4180938.html. If you are not friends on this journal, Please comment there using OpenID.

Stephen Karam is the author of Sons of the Prophet (2012 Pulitzer Prize Finalist and winner of the Drama Critics Circle, Outer Critics Circle & Lucille Lortel Awards for Best Play). Other plays include Speech & Debate, the inaugural production of Roundabout Underground; columbinus (New York Theatre Workshop); Girl on Girl (Brown/Trinity Playwrights Rep); and Emma (a modern, musical version of Jane Austen's novel), performed by students of the Professional Performing Arts High School in NYC in association with Waterwell. He wrote the libretto for Dark Sisters, an original chamber opera with composer Nico Muhly (co-produced by Gotham Chamber Opera, MTG and Opera Company of Philadelphia).

Stephen has been a guest teacher at Brown University, NYU, University of Scranton, The New School and is a 2012 writer-in-residence at the Fieldston School in NYC.

A MacDowell Colony Fellow, Stephen grew up in Scranton, PA and is a graduate of Brown University. He is the recipient of the inaugural Sam Norkin Off-Broadway Drama Desk Award and the Dramatists Guild's Hull-Warriner Award for Sons of the Prophet.

This journal is friends only. This entry was originally posted at http://reviews-and-ramblings.dreamwidth.org/4181630.html. If you are not friends on this journal, Please comment there using OpenID.

Darren Criss is an American actor, singer-songwriter, multi-instrumentalist, and composer. One of the founding members and co-owners of StarKid Productions, a musical theater company based in Chicago, Criss first garnered attention playing the lead role of Harry Potter in StarKid's musical production of A Very Potter Musical. Criss is best known for his portrayal of Blaine Anderson (2010–present), an openly gay high school student, on the Fox musical comedy-drama series Glee.

The DL Chronicles, a gay-themed television series, was created by filmmakers Quincy LeNear and Deondray Gossett. LeNear and Gossett were one of the lucky 33 couples married by Queen Latifah during January 25, 2014's historic Grammys ceremony on national television. The couple now share the last name "Gossfield." Quincy LeNear and Deondray Gossett have been together for almost 20 years: "We met on an indie movie that two of our mutual friends wrote and directed. We have been together since then."

Han Ong is a high-school dropout and one of the youngest recipients of a MacArthur Foundation "genius" grant. His works include the novels Fixer Chao and The Disinherited, and address such themes as outsiderness, cultural clash, and class conflict. In Fixer Chao, William Paulinha, a Filipino street hustler, is in a self-imposed reform when he meets Shem, a failed writer now ostracized by his wife and NYC's literati, Shem recruits Paulinha to retaliate against the community that has spurned him.

Russell Grant is a British astrologer and media personality. He has written several books on Astrology. Grant is gay and has been with his partner Doug Beaumont, who is also his manager, since 1974. Grant's original career was as an actor and performed in a variety of productions including Tom Brown's Schooldays with Keith Chegwin who shared a similar career path from acting to television. It is through this work he met Beaumont, who worked as a stagehand in a Blackpool theatre.

Tom Bianchi is an American writer and photographer who specializes in male nude photography. For many years, he lived (and worked) with his life partner, Mark Prunty, a computer graphics designer, in LA, California. They met in 1991 at a book signing party for Bianchi. Bianchi wanted to do something meaningful for his community: "Out of the Studio," a photo study of gay relationships, gave him "renewed energy and purpose." Since 2012 he is living with his current partner, Ben, in Palm Springs.

William S. Burroughs was an American novelist, short story writer, essayist, painter, and spoken word performer. Ian Sommerville was an electronics technician and computer programmer. He is primarily known through his association with William S. Burroughs's circle of Beat Generation figures, and lived at Paris's so-called "Beat Hotel" by 1960, when they were regulars there, becoming Burroughs's lover and "systems adviser". He died in a single car accident near Bath, England in 1976.

This journal is friends only. This entry was originally posted at http://reviews-and-ramblings.dreamwidth.org/4182465.html. If you are not friends on this journal, Please comment there using OpenID.

Gresham’s annual Applefest is its biggest event of the year, and it brings out the best—and worst—in the residents of this tiny Wisconsin village. This year’s festival is expected to be the biggest yet, and that means the apple pie contest will determine the reputations of numerous bakers, housewives and others. Before the contest is over, however, one of the judges will be dead and cold.

When one of Gresham’s most prominent—and reviled—citizens suddenly dies while judging the apple pies, all signs indicate someone tried to poison her. That theory is quickly thrown into doubt when the medical examiner can find no trace of poison. When it seems like the investigators have given up on finding the truth, local bookstore operator Zachary Gagewood must find out who the killer is before someone else falls prey to an apple pie!

This journal is friends only. This entry was originally posted at http://reviews-and-ramblings.dreamwidth.org/4182661.html. If you are not friends on this journal, Please comment there using OpenID.

Gay Contemporary Romance
Something Like Spring by Jay Bell

Nothing in this world is permanent. Friends, lovers, even family, can all disappear in the blink of an eye. Without these anchors, it's all too easy to find oneself drifting.

Jason Grant doesn't have much, aside from a beat-up old guitar and knack for getting kicked out of foster homes. His latest placement is set to be just another in a long line of failures. Then he meets Caesar Hubbard, a handsome guy who lives down the hall. For the first time in his life, Jason wants to stay, which means learning to be part of a family, and not letting his feelings--or his actions--ruin his first real chance of falling in love.

Something Like Spring introduces a new character to the Seasons story, one with a troubled past and an equally turbulent future. Jason must traverse a winding road fraught with emotional conflicts and tough decisions... a road that might just lead to a certain couple in Austin.

This journal is friends only. This entry was originally posted at http://reviews-and-ramblings.dreamwidth.org/4182876.html. If you are not friends on this journal, Please comment there using OpenID.
Collapse