A native of Sarasota, Florida, Hayes' success as a Texas age group and high school swimmer earned him a full scholarship to University of California, Los Angeles (UCLA). He was the highest scoring freshman at the 1982 NCAA Men's Swimming and Diving Championships, helping the UCLA Bruins win the national team championship.

Hayes’ first national and international titles came in 1983. He won seven medals at the 1983 World University Games in Edmonton – the most by any American swimmer – and his win in the 200-meter freestyle was the only U.S. gold. His UCLA coach Ron Ballatore was quoted in Sports Illustrated about Hayes' Edmonton performance, saying, "Hayes can come home better than anyone I've ever seen." A few weeks later, he won the 200-meter freestyle at the 1983 summer United States Swimming Championships.


This journal is friends only. This entry was originally posted at http://reviews-and-ramblings.dreamwidth.org/4248617.html. If you are not friends on this journal, Please comment there using OpenID.

Hubert Fichte was born on March 21, 1935 in Perleberg Hospital. A few weeks after his birth his family moved to Hamburg-Lokstedt. Fichtes mother worked as stenotypist and he was mostly raised by his grandmother. His father, a Jewish merchant, emigrated to Sweden and Fichte never met him. His parents were not married. As a child Fichte was made believe he was a half-orphan. He received an education as an actor and as a farmer. In the late fifties he worked in Provence, France, as a shepherd for several months. From 1961 on he lived in Hamburg.

In the mid sixties Fichte published his first novels. He then had a regular column called Plattenragout (record ragout) in the magazine konkret. In 1966 he criticised the German police's work in those days in an article called „the police – your friend and aide“: "Shall the baton displace arguments, humour, understanding from the side of the police in this young democracy, burdened with an evil mortgage?" (konkret, Nr. 8). His main influences were Marcel Proust, Hans Henny Jahnn and Jean Genet. With Genet he did a famous interview. He first met Jahnn in 1949 and Jahnn helped Fichte reveal his homosexuality. Fichte described their friendship in his novel Versuch über die Pubertät (Attempt about the puberty) in 1974.

In the seventies Fichte worked more and more on ethnological research. From 1971 to 1975 he travelled to Bahia (Brazil), Haiti and Trinidad several times. He later described the works based on this travels, like Xango (1976) and Petersilie, (1980) as "Ethnopoesie". With them he created his very own technique of combining science and poetry. A sort of „domestic ethnology“ was done with his St. Pauli interviews like in Wolli Indienfahrer (St. Pauli is a famous low income and subculture district in Hamburg). Fichte's cohabitee (since 1961) Leonore Mau published her photograph volumes Xango and Petersilie at the same time.

More LGBT History at my website: www.elisarolle.com/, My Ramblings/Gay Classics


This journal is friends only. This entry was originally posted at http://reviews-and-ramblings.dreamwidth.org/2814974.html. If you are not friends on this journal, Please comment there using OpenID. 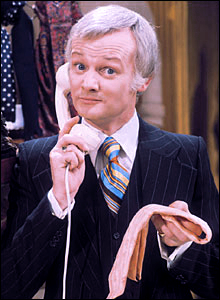 Frederick John Inman (28 June 1935 – 8 March 2007) was an English actor and singer best known for his role as Mr. Humphries in Are You Being Served?, a British sitcom in the 1970s and 1980s. Inman was also well known in the United Kingdom as a pantomime dame. He lived in a mews house in Little Venice for 30 years. On 23 December 2005, Inman entered into a civil partnership at Westminster Register Office with his partner of 33 years (at the time), Ron Lynch. (P: John Inman while in Are You Being Served?.)

Born in 1935, Inman made his stage debut aged 13. He worked in retail in London as a young adult and after four years left to earn his Equity Card. He made his West End debut in the 1960s, and his television debut in an episode of A Slight Case of ... entitled The Enemy Within in 1965, next appearing in an episode of Two In Clover in 1970. After a successful pilot of Are You Being Served?, Inman played the camp Mr. Humphries in the sitcom from 1972 to 1985. This role made him a household name and won him awards, including BBC TV Personality of the Year. In his later years, Inman became a well known pantomime dame. He died of hepatitis in 2007, aged 71.

Inman was born in 1935 in Preston, Lancashire, and was often said to be a cousin of actress Josephine Tewson, though she has denied the relationship. At the age of 12, Inman moved with his parents to Blackpool where his mother ran a boarding house, while his father owned a hairdressing business. As a child, he enjoyed dressmaking. He was educated at Claridge House in Preston, and then a secondary modern. Inman always wanted to be an actor, and his parents paid for him to have elocution lessons at the local church hall. At the age of 13 he made his stage debut in the Pavilion on Blackpool's South Pier, in a melodrama entitled Freda. Aged 15, he took a job at the pier, making tea, clearing up and playing parts in plays.

John Inman, a few years ago, came to San Francisco and hosted a High Tea at the Fairmount Hotel where he gave a very witty little talk and then engaged all of us in a Q&A. One politicized person tried to force John to say outright that his "Mr. Humphries" was gay. John would only say, "Mr. Humphries was raised by women." Getting him off the hook of that insistent activist, I asked John one question which made him sparkle with the joke: "Mr. Inman, Would you please answer the phone?" He shifted his face and body and lifted a pretend phone and announced, deeply:" Men's Wear." He brought down the house. What a fine guy he was, and what a good actor. --Jack Fritscher

This journal is friends only. This entry was originally posted at http://reviews-and-ramblings.dreamwidth.org/4248906.html. If you are not friends on this journal, Please comment there using OpenID.

Lawrence Bruce Hayes (born March 8, 1963) is an American former competition swimmer best known for anchoring the U.S. men's 4x200-meter freestyle relay team that won the gold medal at the 1984 Summer Olympics in Los Angeles. He became the first Olympic gold medalist to compete at the Gay Games when he swam at Gay Games III in Vancouver in August 1990. He came out publicly while competing, and has gone on to organize Gay Games events. "When you're famous and you come out, you become a role model"

Emily Jenkins, who also writes under the name E. Lockhart, is a writer of children's picture books, young adult novels, and adult fiction. Her first novel as E. Lockhart, The Boyfriend List, was published in 2005 and has been followed by three sequels, The Boy Book (2006), The Treasure Map of Boys (2009), and Real Live Boyfriends (2010). Dramarama is about 2 theater-mad, self-invented fabulositon Ohio teenagers. One boy, one girl. One gay, one straight. 1 black, 1 white. And SUMMER DRAMA CAMP.

The great love of Henry Ward Beecher’s life was a Greek student he’d met at school named Constantine Fondolaik. Beecher was so enamored of the youth, whom he called “the most beautiful thing I had ever seen,” that he changed his own middle name to Constantine and, in 1832, had a contract drawn up in which they promised to love and watch over each other with eternal devotion. They maintained their romantic relationship into their college year and beyond, until Fondoliak died of cholera in 1842.

Hubert Fichte (March 21, 1935 - March 8, 1986) was a German novelist. In the seventies Fichte worked more and more on ethnological research. From 1971 to 1975 he travelled to Bahia (Brazil), Haiti and Trinidad several times. He later described the works based on this travels, like Xango (1976) and Petersilie, (1980) as "Ethnopoesie". Fichte died of AIDS-related illness in 1986. Since 1995 the city of Hamburg has awarded the Hubert Fichte Prize for extraordinary literary works.

Frederick John Inman (28 June 1935 – 8 March 2007) was an English actor and singer best known for his role as Mr. Humphries in Are You Being Served?, a British sitcom in the 1970s and 1980s. Inman was also well known in the United Kingdom as a pantomime dame. He lived in a mews house in Little Venice for 30 years. On 23 December 2005, Inman entered into a civil partnership at Westminster Register Office with his partner of 33 years (at the time), Ron Lynch. He died in 2007, aged 71.

Radclyffe Hall and Una Troubridge met in 1915 as Troubridge was the cousin of singer Mabel Batten (aka Ladye) who was Hall's lover at the time. Mabel died in 1916, and Hall and Troubridge moved in together the following year. In the last nine years of Hall's life she had become obsessed with a White Russian nurse, Evgenia Souline. This made Troubridge very unhappy, but she tolerated their relationship. Despite all their troubles, Troubridge stayed with Hall and nursed her until she died in 1943.

Walter Plunkett was a prolific costume designer. He lived with his devoted partner, Lee. Christopher Isherwood and Don Bachardy would visit them occasionally. "They were both into knitting." Bachardy remembered. "They knitted covers for their toilet seats. They knitted things all over the place." Plunkett retired in 1966, after having worked on Broadway and for the Metropolitan Opera. He spent the last years of his life with Lee, whom he formally adopted so that he could inherit his estate.

This journal is friends only. This entry was originally posted at http://reviews-and-ramblings.dreamwidth.org/4249657.html. If you are not friends on this journal, Please comment there using OpenID.

I'd never believed in love at first sight. I mean, it had never happened to me, so I guess I just didn't think about it. But then...
Darcy. Beautiful, kind, intelligent Darcy, who showed me a whole new meaning to the word love, and how to live when I thought there was nothing to live for.
While teaching me how to play the guitar a deep friendship developed between us, but it only made me want what I couldn't have...or could I? Faced with difficult times and hard choices, Darcy becomes a crucial element in my life.
I'm hiding something from her though. Something big that could destroy all the trust we've built.
Was it love at first sight? No.
It was so much more.

This journal is friends only. This entry was originally posted at http://reviews-and-ramblings.dreamwidth.org/4250050.html. If you are not friends on this journal, Please comment there using OpenID.
Collapse