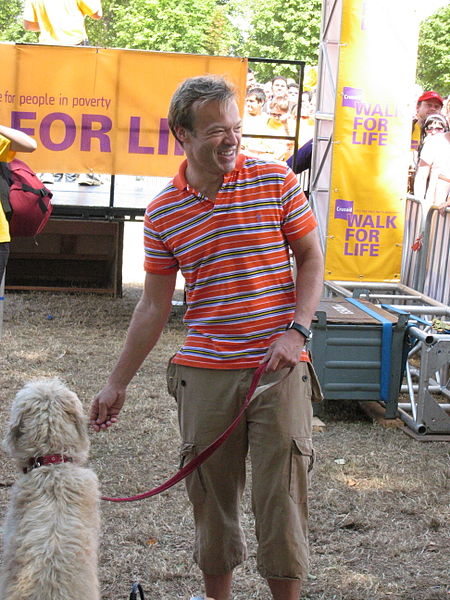 Graham William Walker, known by his stage name Graham Norton (born 4 April 1963), is an Irish comic presenter. Based in the United Kingdom, he is the host of comedy chat show The Graham Norton Show. Previously shown on BBC Two, it took the prestigious Friday night slot on BBC One from Jonathan Ross in 2010. He also presents on BBC Radio 2 and is the BBC television commentator of the Eurovision Song Contest, which led Hot Press to describe him as "the 21st century's answer to Terry Wogan". Norton is known for his innuendo-laden dialogue and flamboyant presentation style, and has won the BAFTA TV Award for Best Entertainment Performance on five occasions. (P: John Griffiths. Graham Norton pictured with dog in 2006)

In 2012, Norton sold his production company, So Television to ITV for around £17 million.

Norton was in a relationship with Trevor Patterson from 2010 to 2013.

Norton has two dogs, a labradoodle called Bailey (as seen to the right) and a second dog called Madge, whom he adopted from the UK charity Dogs Trust.

Graham Norton, whose impish charm and quick wit has earned him a place in our hearts, looks back at his life so far. In his own words, SO ME is 'a real romp through a journey from living in a cockroach-infested council flat in Hackney to buying Claudia Schiffer's townhouse in Manhattan, from my mother dragging me to school to me dragging her to Sharon Stone's house for New Year's brunch'. From a not-so miserable Irish childhood to dropping out of Cork University and joining a commune of hippies in San Francisco, from his disastrous attempts at becoming a serious actor to the rise of his comedy career in London, this is a hilarious, insightful and moving account of a colourful life.


This journal is friends only. This entry was originally posted at http://reviews-and-ramblings.dreamwidth.org/4290032.html. If you are not friends on this journal, Please comment there using OpenID.

Be it unrequited fascination with his straight best friend or impossible fantasies of rekindled interest with his heartbreaking ex, Mason has no clue why the perfect connection seems to keep slipping through his fingers. When another lonely holiday seems like too much weight to shoulder, Mason gives up on romance and seeks out the next best thing-rented company. Jack is everything a person could want in an escort: willing, hot, and built like an angel. Mason can't resist. After all, who wouldn't be interested in a guy who loves kid's movies, is a self-professed Peter Pan, and has no problem throwing caution to the wind at a moment's notice. But then interest quickly blooms into a whole new emotion-an emotion that Mason knows far too well, especially when Jack has no interest in returning it, preferring to keep his heart safely tucked away in Neverland.

This journal is friends only. This entry was originally posted at http://reviews-and-ramblings.dreamwidth.org/4290183.html. If you are not friends on this journal, Please comment there using OpenID.

Starting from March up until June I will feature authors attending the UK GLBTQ Meet in Bristol (June 7 & 8, 2014: ukglbtfictionmeet.co.uk/2014-registration/2014-attendees/).

Today author is Joanna Chambers: Joanna Chambers always wanted to write. She spent over 20 years staring at blank sheets of paper and despairing of ever writing a single word. In between staring at blank sheets of paper, she studied law, met her husband and had two children. Whilst nursing her first child, she rediscovered her love of romance and found her muse. Joanna lives in Scotland with her family and finds time to write by eschewing sleep and popular culture.
Website: http://joannachambers.com/

Joanna Chambers is offering a copy of Beguiled to one commenter on this blog. You can comment on LJ or DW if you have an account (I will send a PM to the winner), if you don't have an account, please leave a comment on DW with a contact email.

A fleeting pleasure is the sweetest seduction…

David Lauriston couldn’t be less interested in King George IV’s first visit to Edinburgh. But with Faculty of Advocates members required to put on a minimal show of patriotism, David makes an appointment with his tailor for a new set of clothes—only to run into a man he hasn’t seen for two long years.

Much has changed since their bitter parting, except their stormy attraction. And when Murdo suggests they enjoy each other’s company during his stay, David finds himself agreeing. After all, it’s only a temporary tryst.

Amidst the pomp and ceremony of the King’s visit, Murdo’s seduction is more powerful than David ever imagined possible. But when other figures from David’s past show up, he is drawn into a chain of events beyond his control. Where his determination to help a friend will break his body, threaten his career, and put at risk the fragile tenderness he’s found in Murdo’s arms.

This journal is friends only. This entry was originally posted at http://reviews-and-ramblings.dreamwidth.org/4290497.html. If you are not friends on this journal, Please comment there using OpenID.