Vampire Riah Preston has made peace with her immortality and uses it, along with the others of the Spiritus Group, to fight evil. She is comfortable with her lengthy past staying right where it is…until the cousin of her friend and ally, Ivy Hernandez, goes missing. An impromptu trip to Romania takes her back to a land she swore she’d never step foot on again, and when the universe further conspires to send her back in time over five hundred years, everything she’s fought so hard for is in jeopardy: her friends, her life, her love. One man holds the key, but can she and the others survive their encounter with him? Or will the very real Vlad Dracula finally spell the end for Riah?

This journal is friends only. This entry was originally posted at http://reviews-and-ramblings.dreamwidth.org/4387253.html. If you are not friends on this journal, Please comment there using OpenID.

Prosecutor Danielle Soto believes her position on the sorority killer task force is a perfect way to advance her career, but her plans don’t include falling hard for a captivating woman who lives in a completely different world. When the investigation and her attraction to Ellen Davenport collide, Danny must choose between the safety of sameness and the peril of the unknown.

Ellen Davenport has secrets, but until Danny Soto entered her life, she hadn’t realized that protecting her privacy would come at such a high price. Can she explore her attraction to Danny without exposing herself and her family to danger, or must she risk everything for love?

Bounty Hunter Luca Bennett’s in a bind, which is nothing new, but this time it’s her feelings, not a jumper, that’s got her tangled in knots. She’s finally decided she wants to be more than a friend with benefits to cop Jessica Chance, but when hot and dangerous attorney Ronnie Moreno returns to town, a new case and an old flame threaten to interfere. When the case puts her at odds with the entire police department, Jess included, Luca is forced to make a hard choice that could change her entire world. As the lines between right and wrong blur, she faces the biggest risks of her life. Luca loves to gamble, but the stakes have never been higher. Will she win big or will she lose everything?

This journal is friends only. This entry was originally posted at http://reviews-and-ramblings.dreamwidth.org/4387428.html. If you are not friends on this journal, Please comment there using OpenID.

Starting from March up until September I will be part of the 2014 GRL Blog Tour as featured blogger. I will host authors attending the GayRomLit Retreat in Chicago (October 16-19, 2014: gayromlit.com/content/2014-grl-featured-blogger-program). To my guests, I asked to brainstorm around the common theme "inspiration". Today author is Jeff Adams:

The Inspiration Behind the Hat Trick Series

Thanks, Elisa, for letting me visit today. It's always great to be on your blog. As Elisa and I talked about me dropping in here, she asked me to talk about the inspiration behind the Hat Trick books, the original as well as the just released Hat Trick 2: Playing the Rebound. Please leave comments if you have any questions. I'll stop by throughout the day and respond. Also, I'm happy to give away an ebook copy of Hat Trick 2 to some lucky commenter.

There are a lot of sources that play into the stories I'm telling.

The original core love story between Simon and Alex in book one came from a trio of guys I got to know at hockey practice. The session was super early Saturday morning and was made up of a diverse group in terms of age and skill level. This trio was just out of high school and were clearly tight with each other. They practiced and played together as much as they could. While there was good natured ribbing, there was no doubt they had each other's backs, too.

As I got to know them and watch them interact with each other, I wondered what would happen to that dynamic if one of them came out as gay. Or, even more, how the third would react if the other two ended up dating each other. The train of thought continued as I considered how they team they played on might react to teammates in a relationship.

Thus was born Simon and Alex as well as their two best friends, Jackson and Leo. Yes, three guys provided the inspiration behind four.

While the first Hat Trick book was a young adult story about what happened to Simon and Alex when they were outed to their high school hockey team, Hat Trick Overtime: A Classic Winter's Night is basically a short story sequel showing the guys on a magical date. It's inspiration was simple. I wanted to put the guys in the middle of the 2014 NHL Winter Classic and since University of Michigan hockey was part of that, it was easy to send them into the action since they would be U.M. freshmen.

Some of the inspiration behind the new book, Hat Trick 2: Playing the Rebound, is more important and personal to me. With the action shifting to Simon and Alex in their sophomore year at U.M., the guys are starting to figure out their future.

For Simon, I changed his major form political science to social work. I have a huge respect for those who undertake social work as a career. I've become friends with several through volunteer work I've done for organizations that work with LGBT homeless youth as well as at-risk youth. Hearing the stories of how social workers took up the role, provided the imputus for Simon to do the same.

Given everything that Simon goes through in the first Hat Trick, it's was a natural for him to make the decision to pursue a major where he could make a difference in the lives of other young people. Simon starts down a path in Playing the Rebound that's one I've thought about doing for myself, though I'm not sure how I'd fair with going back to school, which is what it would take. I'm certainly writing for Simon something I wished I'd learned more about when I was young and in college.

It's my hope that readers find their own inspiration within the pages of the Hat Trick stories. It could be anything from seeing the power of friendship and making sure you're a good friend, deciding to come out and live your truth, being an ally or being of service to help those who need it.

Here's a brief excerpt from Hat Trick 2: Playing the Rebound, which is just out from JMS Books. This shows a preview of what Simon is up to as he starts working with teens at a local LGBT community center. 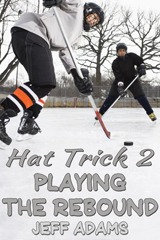 The events from two years ago are still fresh in Simon Robert’s mind as he and Alex Miller begin their sophomore year at the University of Michigan. Nightmares are a routine occurrence as Simon relives the crimes his father and brother committed. Now, with his father ill and asking to see him, Simon must decide if he should see the man who tried to send him away to be fixed. And then there’s Zach. Simon’s conflicted about making peace with his older brother who tormented him as they grew up and caused him to be outed to his parents, friends and teammates.

Alex wants Simon to find closure, but Alex is furious at the thought of forgiving Zack. With no clear direction, Simon finds guidance from an unexpected, but very welcome, source.

At the same time, the University’s student body is faced with an anti-gay attacker among them. When he witnesses an attack first hand, memories threaten to overwhelm Simon. At the same time, he’s also emboldened to take action, which might turn him into a target.

Despite the distractions, Simon works towards his future as he begins working with teens at the local LGBT community center. He has the opportunity to use his story as a teaching tool to help others come out. While he’s never enjoyed telling his story, he looks for the courage to speak his truth to an audience.

Luckily, not everything is chaos. Simon and Alex mark their anniversary in epic fashion, continue to play hockey and hang out with good friends. But with many demands on them, can Simon and Alex set up the rebound necessary to create the scoring opportunity for their future?

This journal is friends only. This entry was originally posted at http://reviews-and-ramblings.dreamwidth.org/4387651.html. If you are not friends on this journal, Please comment there using OpenID.

There is one thing to be said for sure about this series, and yes, I'm saying it with a positive meaning, it's totally freed of heavyness; once you start one book, you are more likely able to finish it in one gulp, it goes down smoothly and easily.

Each story has a strong point, and this time is the contraposition between Alpha and Gamma roles in the pack hierarchy moved to a relationship: in the Dark Hollow Wolf Pack homosexuality isn't something frowned upon, but a relationship between two wolf, that is something unheard of. And so when Rory, not only the Gamma of the pack but also the nephew of the Alpha, Mateo, finds out his mate his another wolf, and an Alpha to both, that is when there are trouble; basically to accept the mating bond Rory, the lesser wolf, had to renounce to his priviliged status in the hierarchy pack... even if there is who is saying the pets, the mates of the wolves, are the ones really ruling the relationships.

Anyway, I did enjoy this story, it was like giving freedom to the brain for an hour or two, to just rest and relax.

More Reviews by Author at my website: http://www.elisarolle.com/, My Reviews

This journal is friends only. This entry was originally posted at http://reviews-and-ramblings.dreamwidth.org/4388297.html. If you are not friends on this journal, Please comment there using OpenID.