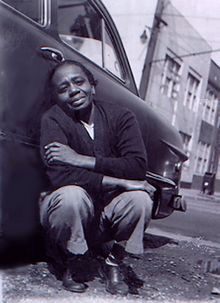 Ruth Charlotte Ellis (July 23, 1899 – October 5, 2000) was an African-American woman who became widely known as the oldest surviving open lesbian, and LGBT rights activist at the age of 100, her life being celebrated in Yvonne Welbon's documentary film Living With Pride: Ruth C. Ellis @ 100.

Ellis was born in Springfield, Illinois, on July 23, 1899, to Charlie Ellis and Carrie Farro Ellis. She was the youngest of four children in the family and the only daughter. Her parents were born in the last years of slavery in Tennessee. Ellis' mother died when she was a teen. She came out as a lesbian around 1915, and graduated from Springfield High School in 1919, at a time when fewer than seven percent of African Americans graduated from secondary school. In the 1920s, she met the only woman she ever lived with, Ceciline "Babe" Franklin. They moved together to Detroit, Michigan in 1937 where Ellis became the first American woman to own a printing business in that city. She made a living printing stationery, fliers, and posters out of her house. Ellis and Franklin's house was also known in the African American community as the "gay spot". It was a central location for gay and lesbian parties, and also served as a refuge for African American gays and lesbians. Although Ellis and Franklin eventually separated, they were together for more than 30 years. Franklin died in 1973. Throughout her life, Ellis was an advocate of the rights of gays and lesbians, and of African Americans. She died in her sleep at her home on October 5, 2000.

The Ruth Ellis Center honors the life and work of Ruth Ellis, and is one of only four agencies in the United States dedicated to homeless LGBT youth and young adults. Among their services are a drop-in center, street outreach program, transitional living programs, and emergency housing shelter.


This journal is friends only. This entry was originally posted at http://reviews-and-ramblings.dreamwidth.org/4452091.html. If you are not friends on this journal, Please comment there using OpenID.

Starting from March up until September I will feature authors attending the GayRomLit Retreat in Chicago (October 16-19, 2014: http://gayromlit.com/grl-authors).

Max Vos is a classically trained chef with over 30 years of food service experience. After retiring in 2011, Max found himself with time on his hands and was urged to turn his talents to writing. ‘Cooking English’, a short story, was his first published work, and since then Ravenous Romance have published five more of his short stories. His first novel, P.O.W. will be released October 18th with MLR Press and he has just completed his second novel. His first self-published short story was a best seller on Amazon, staying in the top ten for over a week. You will find everything in a Max Vos story. From sweet and sexy, even raunchy, to powerful, raw and gritty—something for all tastes.
Website: http://max-vos.blogspot.com/

Max Vos is offering a copy of Inappropriate Roads: A Max Vos Anthology to one commenter on this blog. You can comment on LJ or DW if you have an account (I will send a PM to the winner), if you don't have an account, please leave a comment on DW with a contact email.

It’s time for a journey along some inappropriate roads….
Along the way, you’ll meet a host of interesting men: the shy teacher, more than a few bears, the geeky numismatist, and the hunky glass artist, to name but a few.
They all have a story to tell, and it won’t be long before you spot the common theme – hot encounters with even hotter men. And these guys don’t pull any punches, so expect to find yourself getting hot under the collar.
So if you’re ready, we’ll be off. Fasten your seatbelts, please.
And then hold on for an exhilarating ride….

This journal is friends only. This entry was originally posted at http://reviews-and-ramblings.dreamwidth.org/4452330.html. If you are not friends on this journal, Please comment there using OpenID.

Before announcing the 2014 Rainbow Awards Finalists, I'd like to highlight this year we had 525 submissions, which is the highest number since awards inception in 2009. We raised almost 11.500$ to charities, and the details are:

There are 172 members of the jury who are reading right now to arriving to select the winners of the 2014 Rainbow Awards in time for December 8, 2014. From the many Honorable Mentions we gave, you can understand the quality of the submissions for this year cycle of the awards, so cutting down to finalists was really, really hard. Like Solomon, I decided to ask to the jury an additional effort so to be able to advance 50% of the submissions. Considering some tie titles, 284 titles are in the finals.

The Finalists for the 2014 Rainbow Awards are:

Lesbian Romantic Comedy
Eight Dates by Lori L. Lake
Out Of Retirement by Erica Lawson
Playing My Love by Angela Peach
That Certain Something by Clare Ashton

Gay Historical Romance
Dance of Stone by Jay Lewis Taylor
Forever Hold His Peace by Rebecca Cohen
Lovers and Liars by Paul Alan Fahey
The Dead Past by Kate Aaron
Think of England by KJ Charles
Tournament of Shadows by S.A. Meade

LGBT Erotica
At Her Feet by Rebekah Weatherspoon
Breaking Free by Cat Grant
Games Boys Play by Zoe X. Rider
Incubus Tales by Hushicho
Into The Fire by Lori Toland
The Thief Taker by William Holden

LGBT General Non Fiction
Gaysia: Adventures in the Queer East by Benjamin Law
I Probably Shouldn’t Have Done That by Edmond Manning
Lesbian Marriage: A Love & Sex Forever Kit by Kim Chernin & Renate Stendhal
The End of Eve by Ariel Gore
Time Fries! Aging Gracelessly in Rehoboth Beach by Fay Jacobs
True Stories Too: People and Places From My Past by Felice Picano

Gay Romantic Comedy
Can This Be Real by L.E. FranksL.E. Franks
Caught! by JL Merrow
Merry Gentlemen by Josephine Myles
On Archimedes Street by Jefferson Parrish
Shiny! by Amy Lane
The Ghost Slept Over by Marshall Thornton

Gay Contemporary General Fiction
Bottoms Away by Etienne
First Exposure by Alan Chin
I Loved You More by Tom Spanbauer
My Favorite Uncle by Marshall Thornton
Paradise at Main and Elm by Barry Brennessel
Sex & Sourdough by A.J. Thomas
Stronger Than This by David-Matthew Barnes
The Genealogy of Understanding by Daniel M. Jaffe
The Misadventures of the Family Fletcher by Dana Alison Levy
Walking the Camino Sagrado by Michael Chavez

Gay Erotic Romance
A Little Too Broken by Brad Vance
A Place for Cliff by Talon ps
Desires’ Guardian by Tempeste O’Riley
Forgive Us by Lynn Kelling
Fractured by Mickie B. Ashling
Gin & Jazz 1- 4 by Morticia Knight
If It Drives by L.A. Witt & Aleksandr Voinov
It's Like This by Anne O'Gleadra
Lab Rat's Love by Ana J. Phoenix
Love and Salvage: Loving Emmett by Mathew Ortiz
More Than Everything by Cardeno C.
My Brother's Lover by Lynn Kelling
Splinters by Thorny Sterling
The Foster Family by Jaime Samms
The House on Hancock Hill by Indra Vaughn
The Only One Who Knows by Cat Grant & L.A. Witt
Tough Love by Heidi Cullinan
Trusting Thomas by K.C. Wells
Uncovered by Kyell Gold

Gay Mystery / Thriller
A Hunted Man by Jaime Reese
Antidote by Jack L. Pyke
Bird of Paradise by G.J. Paterson
Corruption by Eden Winters
Holding Out for a Fairy Tale by A.J. Thomas
Home The Hard Way by Z.A. Maxfield
Hostile Ground by Aleksandr Voinov & L.A. Witt
Jaded by EM Lynley
Love Is A Stranger by John Wiltshire
Murder on the Mountain by Jamie Fessenden
Other People by Francis Gideon
Pawn of Satan by Mark Zubro
Recruited by Ethan Stone
Relief Valve by JL Merrow
Slasherazzi by Daniel A. Kaine
The Next by Rafe Haze

Gay & Lesbian Young Adult
Asher's Fault by Elizabeth Wheeler
Educating Simon by Robin Reardon
Freak Camp: Posts From a Previously Normal Girl by Jessica V. Barnett
Heavyweight by MB Mulhall
Here’s to You, Zeb Pike by Johanna Parkhurst
Not Broken, Just Bent by Mia Kerick
Omorphi by C. Kennedy
Pray The Gay Away by Sara York
Red Devil by Kyell Gold
Running Through A Dark Place by Michael J. Bowler
Safe by Mark Zubro
Silent by Sara Alva
The Red Sheet by Mia Kerick
The Seventh Pleiade by Andrew J. Peters
This Is Not a Love Story by Suki Fleet
Us Three by Mia Kerick
Vivaldi in the Dark by Matthew J. Metzger
You're Always in the Last Place You Look by T.N. Gates

Lesbian Contemporary Romance
About Face by VK Powell
Camellia by Caitlin Ricci & Cari Z.
Clean Slate by Andrea Bramhall
Departure from the Script by Jae
Dudek by Taylor James
Escapades by MJ Williamz
Exception to the Rule by Cindy Rizzo
From the Hat Down by Andi Marquette
How Still My Love by Diane Marina
Like Jazz by Heather Blackmore
Loved and Lost by Stephanie Kusiak
Nightingale by Andrea Bramhall
No Boundaries by Donna K. Ford
Rush by Carsen Taite
See Right Through Me by L.T. Smith
She Sings of Old, Unhappy, Far-off Things by Caren J. Werlinger
Speakeasy by MJ Williamz
Switching Gears by Rhavensfyre
The Heat of Angels by Lisa Girolami
Timeless by Rachel Spangler

Gay Contemporary Romance
A Grand Prix Romance by T.A. Chase & Devon Rhodes
A Heart for Robbie by J.P. Barnaby
A Threefold Cord by Julie Bozza
After the Fall by L.A. Witt
Artist's Touch by Kerry Adrienne
Backstrokes by Dylan Madrid
Because of Jade by Lou Sylvre
Behind the Curtain by Amy Lane
Blindsided by T.A. Chase & Devon Rhodes
Brokenhearted: Hope Cove Book 1 by Cate Ashwood
Chasing the Dragon by Kate Sherwood
Cub by Jeff Mann
Ethan in Gold Amy Lane
Fall Hard by JL Merrow
Flankman (A Crow Creek Novel) by Nya Rawlyns
Foolish Me by Tinnean
Gathering Storm by Alexa Land
General Misconduct by L.A. Witt
Heart Knot Mine by Lily Velden
Hungry for Love by Rick R. Reed
Hunted by Liz Powell
Junk by Josephine Myles
Jurassic Heart by Anna Martin
Last First Kiss by Diane Adams
Love Lessons by Heidi Cullinan
Message of Love by Jim Provenzano
Mirage by Tia Fielding
Names Can Never Hurt Me by Wade Kelly
Not Just Friends by Jay Northcote
O​ut of the Gate by EM Lynley
Painting Fire on the Air by J.P. Barnaby
Paris Connection by J.P. Bowie
Perfect Imperfections by Cardeno C.
Pick Up the Pieces by Tinnean
Rasputin's Kiss by L.M. Somerton
Rescued by Felice Stevens
Resurrection Man by K.Z. Snow
Sacrifices by Chris T. Kat
Saving Liam by DP Denman
Serpentine Walls by CJane Elliott
Serving Love At Carnival by T.A. Chase & Devon Rhodes
Solitude by Anna Martin & Tia Fielding
Something Like Spring by Jay Bell
Spencer by J.P. Barnaby
Summer Son by Anna Martin
Takedown by Cat Grant
The Bridge on the River Wye by Adam Fitzroy
The Companion by Lloyd A. Meeker
The Fall Guide by Talya Andor
The Last Thing He Needs by J.H. Knight
The Mating of Michael by Eli Easton
The Only One Who Matters by Cat Grant & L.A. Witt
The Silence of the Stars by Kate McMurray
The Terms of Release by BA Tortuga
The Tin Box by Kim Fielding
Unbroken by Larry Benjamin


This journal is friends only. This entry was originally posted at http://reviews-and-ramblings.dreamwidth.org/4452585.html. If you are not friends on this journal, Please comment there using OpenID.