Count Francesco Algarotti (11 December 1712 – 3 May 1764) was a Venetian polymath, philosopher, poet, essayist, anglophile, art critic and art collector. He was "one of the first Esprits cavaliers of the age," a man of broad knowledge, an expert in Newtonianism, architecture and music and a friend of most of the leading authors of his times: Voltaire, Jean-Baptiste de Boyer, Marquis d'Argens, Pierre-Louis de Maupertuis and the atheist Julien Offray de La Mettrie.

Algarotti was born in Venice as the son of a rich merchant. His father and uncle were art collectors. Unlike his older brother Bonomo he did not step into the company, but decided to become an author. Francesco studied natural sciences and mathematics in Bologna under Francesco Maria Zanotti and in 1728 he experimented with optics. (Zanotti became a lifelong friend.) He travelled in the North of Italy, but moved to Florence, and Rome. At the age of twenty, he went to Cirey and Paris, where he became friendly with Voltaire and Émilie du Châtelet. Two years later he was in London, where he was made a fellow of the Royal Society. He became embroiled in a lively bisexual love-triangle with the politician John Hervey, and Lady Mary Wortley Montagu. Algarotti left for Italy and finished his Neutonianismo per le dame ("Newtonism for Ladies"), a work on optics (1737), dedicated to Bernard le Bovier de Fontenelle. Algarotti had made acquaintance with Antiochus Kantemir. In Summer 1739 he left with Lord Baltimore from Sheerness to Newcastle upon Tyne. Because of a heavy storm the ship went to Harlingen. Returning from Saint Petersburg, they visited Frederick the Great in Rheinsberg. Algarotti had obligations and came back the year after. Algarotti went with Frederick to Königsberg where he was crowned.

Gathering on Sanssouci in the Marble Hall, with Fredrik II. (the Great) of Prussia, Voltaire, d'Argens, La Mettrie, James Keith,George Keith, Friedrich Rudolf von Rothenburg, Christoph Ludwig von Stille, and Algarotti. The painting got lost in 1945
Count Francesco Algarotti was a man of vast knowledge and an expert in art and music who charmed his way into the lives of many of the leading figures of his time. At twenty-two, in London, the bisexual Algarotti became entangled in a love triangle with the bisexual Lord John Hervey, and Lady Mary Wortley Montagu (1689-1762). Hervey and Montagu competed for Algarotti’s love and attention for many years. Frederick the Great fell in love with the charming young Algarotti and named him a count of Prussia and Court Chamberlin. 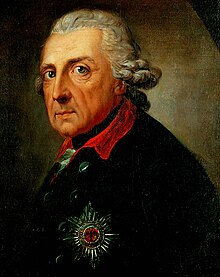 Frederick II (German: Friedrich; 24 January 1712 – 17 August 1786) was the third Hohenzollern king, reigning over the Kingdom of Prussia from 1740 until 1786. Frederick's achievements during his reign included his military victories, his reorganization of Prussian armies, his patronage of the Arts and the Enlightenment in Prussia, and his final success against great odds in the Seven Years' War. He became known as Frederick the Great (Friedrich der Große) and was nicknamed Der Alte Fritz ("Old Fritz") by the Prussian people. (P: Portrait of King Frederick II by Anton Graff, painted in 1781)

In his youth, Frederick was more interested in music and philosophy than the art of war. He defied his authoritarian father, Frederick William I, and sought to run away with his best friend Hans Hermann von Katte. They were caught at the border and King Frederick William I nearly executed his son for desertion. After being pardoned, he was forced to watch the official beheading of Hans. Upon ascending to the Prussian throne, he attacked Austria and claimed Silesia during the Silesian Wars, winning military acclaim for himself and Prussia. Near the end of his life, Frederick physically connected most of his realm by conquering Polish territories in the First Partition of Poland. He was an influential military theorist whose analysis emerged from his extensive personal battlefield experience and covered issues of strategy, tactics, mobility and logistics.

This journal is friends only. This entry was originally posted at http://reviews-and-ramblings.dreamwidth.org/4489879.html. If you are not friends on this journal, Please comment there using OpenID.

David Gerrold (born January 24, 1944 in Chicago, Illinois) is an American science fiction screenwriter and novelist known for his script for the popular original Star Trek episode "The Trouble With Tribbles", for creating the Sleestak race on the TV series Land of the Lost, and for his novelette The Martian Child, which won both Hugo and Nebula awards, and was adapted into a 2007 film starring John Cusack.

The Martian Child is a semi-autobiographical novel, expanded from a novelette of the same name, based on the author's own experiences as a single adoptive father, with most of the key moments drawn from actual events. The novelette won both the Hugo and Nebula awards, and a movie version was released in November 2007, with John Cusack playing the adoptive father. There is some controversy surrounding this character, as David Gerrold and his character in the novel are both gay, but in the movie he is a straight widower.

In 2005, Gerrold was awarded the Telluride Tech Festival Award of Technology in Telluride, Colorado.

In 2013, Gerrold wrote a Starcraft 2 short story titled In the Dark for Blizzard Entertainment's series of short stories.

When David Gerrold decided he wanted to adopt a son, he thought he had prepared himself for fatherhood. But eight-year-old Dennis turned out to be more than he expected—a lot more. Dennis suffered from fetal alcohol syndrome, the son of a substance abuser and alcoholic who abandoned him in a seedy motel at the age of one-and-a-half. His father died of an overdose. Seized by the state, Dennis was shuffled between eight different foster homes in less than eight years. He was abused and beaten severely in at least tow of his placements. Dennis was diagnosed with attention-deficit hyperactivity disorder, and put on Ritalin and then Disipramine. He was prone to violent emotional outbursts. His case history identified him as “hard to place” —a euphemism for “unadoptable.” But for David Gerrold it was love at first sight…


This journal is friends only. This entry was originally posted at http://reviews-and-ramblings.dreamwidth.org/377498.html. If you are not friends on this journal, Please comment there using OpenID.