I'm the author of a large (and growing) number of published and forthcoming novels.

My newest books currently in release are Diary of a Witness (Knopf '09), When I Found You(Transworld UK '09) and the brand new trade paperback edition of Pay It Forward (Simon & Schuster '10).

Most of you know that Pay It Forward turned into a movie. Not the world’s most faithful adaptation, but I’m still glad it was made. I have a handful of other titles in various stages of development. Like the book publications, I’ll add details when they are “in the bank.”

I've written scads of short stories. They've appeared in some good literary journals. (Or at least, I think you’ll agree if you know literary journals. It's kind of a little-known world.) These include The Antioch Review, Michigan Quarterly Review, The Virginia Quarterly Review, Glimmer Train, Ploughshares and lots of others too numerous to go into here. A big handful of my stories won (or were shortlisted or nominated for) literary prizes like The Tobias Wolff award, The Raymond Carver Short Story Contest, and The Pushcart Prize, among others. Three of them were cited in Best American Short Stories. Some of them ended up in anthologies like Dog is my Co-Pilot.

Meet Jordy. He’s on his own in New York City. Nobody to depend on; nobody depending on him. And it’s been working fine. Until this girl comes along. She’s 18 and blond and pretty–her world should be perfect. But she’s seen things no one should ever see in their whole life–the kind of things that break a person. She doesn’t seem broken, though. She seems . . . innocent. Like she doesn’t know a whole lot. Only sometimes she does.
The one thing she knows for sure is that the world is an ugly place. Now her life may depend on Jordy proving her wrong. So they hit the road to discover the truth–and there’s no going back from what they find out.
This deeply felt, redemptive novel reveals both the dark corners and hidden joys of life’s journey–and the remarkable resilience of the human soul.

Elle is a loner. She doesn't need people. Which is a good thing, because now she has to move out of her apartment so her mother's boyfriend won't have to deal with her.
Then she meets Frank, the guy who lives next door to her new place. Being with him is impossible: he's a grown-up and has a girlfriend. Still, Elle can't stop thinking about him. Frank isn't like anyone Elle has ever met. He listens to her. He's gentle. And Elle is falling for him, hard. Then Elle discovers that Frank is different in a way that Elle was never prepared for: he's transgender. Elle's head and her heart explode; her world is turned upside down. But when an accident nearly takes Frank's life, Elle must search inside herself to find not only the true meaning of friendship but her own role in jumpstarting the world. Tender, honest, and compassionate, Jumpstart the World is a stunning story to make you laugh, cry, and honor the power of love.

Fourteen-year-old Angie and her mom are poised at the edge of homelessness... again. The problem is her little sister, Sophie. Sophie has an autism-like disorder, and a tendency to shriek. No matter where they live, home never seems to last long.
Until they move in with Aunt Vi, across the fence from a huge black Great Dane who changes everything. Sophie falls in love immediately, and begins to imitate the "inside of the dog," which, fortunately, is a calm place. The shrieking stops. Everybody begins to breathe again. Until Paul Inverness, the dog's grumpy, socially isolated owner, moves to the mountains, and it all begins again.
Much to Angie's humiliation, when they're thrown out of Aunt Vi's house, Angie's mom moves the family to the mountains after Paul and his dog. There, despite a fifty-year difference in their ages, Angie and Paul form a deep friendship, the only close friendship either has known. Angie is able to talk to him about growing up gay, and Paul trusts Angie with his greatest secret, his one dream. When the opportunity arrives, Angie decides to risk everything to help Paul's dream come true, even their friendship and her one chance at a real home--the only thing she's dreamed of since her father was killed. A place she can never be thrown out. A place she can feel she belongs.
By the bestselling author of DON'T LET ME GO, WHEN I FOUND YOU, and WALK ME HOME, WHERE WE BELONG is a poignant, heartfelt, and uplifting story about finding your place in the world, no matter how impossible it seems.

This journal is friends only. This entry was originally posted at http://reviews-and-ramblings.dreamwidth.org/866495.html. If you are not friends on this journal, Please comment there using OpenID. 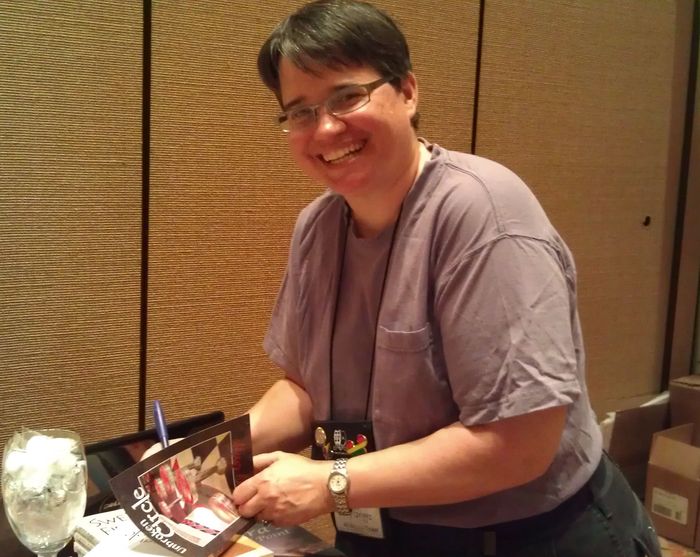 Mary Griggs spent over ten years running bookstores for Borders Books and Music before turning her attention toward nonprofit management. Currently, she is a partner in a non-profit consulting firm with offices in Oakland, California and New Orleans, Louisiana. Her first novel, Unbroken Circle, has been published by Bella Books.

Sallie Lee Hybart doesn’t see many strangers at her diner counter. Pennington, Alabama, is a town the interstate passed by, so newcomers are rare. But this one looks familiar.

Janet Bouton has nothing and no one. Her life has been stripped down to the clothing on her back. Counting out her meager change to pay for a stick-to-the-ribs meal, she is hoping to escape the diner unrecognized. She shouldn’t have come back...but no place else on earth was familiar.

An act of kindness sets a chain of events in motion and pulls Sallie Lee and Janet together, but the past has the power to tear them apart. There are still people in Pennington who remember Janet too well. Small town memories have had a lot of years to simmer, and love may not be the recipe for happiness.

Mary Griggs’ debut romance novel unites a lost soul and a determined survivor to create a passionate story that readers will remember long after the final page.

Long suspicious that the world was going to go up in flames, Jay has retreated to remote Northern California and lived off the grid for years. She didn’t want to be right—but she was.

When the war ended, it was clear nobody had won. Susan knows only one place where she and her extended family might be safe: with Jay, her ex. Desperate and frightened, the refugees rely heavily on their friend Piper, who agrees to make the journey with them.

After a ragged reunion, Jay is willing to take in the newcomers, but the only way they will all survive on the land is if they all work and sacrifice. It is easier said than done, especially when old feelings—and new ones—break the fragile peace and threaten them all.

This journal is friends only. This entry was originally posted at http://reviews-and-ramblings.dreamwidth.org/4301012.html. If you are not friends on this journal, Please comment there using OpenID.

He is the CEO & founder of CockyBoys.com

This journal is friends only. This entry was originally posted at http://reviews-and-ramblings.dreamwidth.org/4563956.html. If you are not friends on this journal, Please comment there using OpenID.

Nick Burd attended the University of Iowa and received his MFA from the New School. His debut novel The Vast Fields of Ordinary was published in May 2009 by Dial Books for Young Readers and received starred reviews from Kirkus Reviews, Library School Journal, and BookList. The New York Times Sunday Book Review hailed the title as “fascinating and dreamy” and “the best kind of first novel” and also named it a Notable Book of 2009. In 2010, The Vast Fields of Ordinary won the American Library Association’s inaugural Stonewall Book Award for Children’s and Young Adult Literature. The book is currently being translated into German and has been optioned for film. Nick lives and writes in Brooklyn.

It's Dade's last summer at home, and things are pretty hopeless. He has a crappy job, a "boyfriend" who treats him like dirt, and his parents' marriage is falling apart. So when he meets and falls in love with the mysterious Alex Kincaid, Dade feels like he's finally experiencing true happiness. But when a tragedy shatters the final days of summer, he realizes he must face his future and learn how to move forward from his past.

This journal is friends only. This entry was originally posted at http://reviews-and-ramblings.dreamwidth.org/2525724.html. If you are not friends on this journal, Please comment there using OpenID.

Klepfisz was born in the Warsaw Ghetto on April 17, 1941 and was 2 years old during the "varshever geto oyfshtand", (Yiddish for 'the Warsaw ghetto uprising'). Her father, Michał Klepfisz, a member of "der algemeynernyidisher arbeter bund", (the Jewish Labour Bund), was killed on the second day of uprising.

Klepfisz escaped with her mother to the Polish countryside where they survived the Second World War by hiding and concealing their Jewish identities, aided by Polish peasants. After the war, the remaining family moved briefly to Łódź before moving to Sweden in 1946. Irena and her mother moved to the United States in 1949.

Klepfisz attended City College of New York, and studied with distinguished Yiddish linguist Max Weinreich, a founder of the YIVO Institute for Jewish Research. Klepfisz graduated CCNY with honors in English and Yiddish.

In 1963, she attended the University of Chicago to do graduate work in English Literature. Irena Klepfisz received a Ph.D. in English in 1970.

Today Klepfisz is known as a Yiddishist, but her מאַמע־לשון (mame-loshn, literally "mother tongue") was Polish; as a child she also learned Swedish. She began to learn Yiddish in Lodz in elementary school after the Second World War. She learned English after emigrating to the United States. In The Tribe of Dina: A Jewish Women's Anthology, which she co-edited with Melanie Kaye/Kantrowitz, Klepfisz describes the experience, up to age 16 or 17, of having "no language in which I was completely rooted.

This journal is friends only. This entry was originally posted at http://reviews-and-ramblings.dreamwidth.org/1479591.html. If you are not friends on this journal, Please comment there using OpenID.

After ten years in an abusive relationship and a near-fatal knife wound, Jonathan Watson is finally free. Unused to being able to make even the smallest decision and smothered by family and well-meaning neighbors, he’s floundering in the real world. Jonathan is afraid of falling into another relationship too quickly and realizes he needs time to rediscover who he is before he attaches himself to another man.

He never counted on meeting Ben Urquhart, though. Ben tempts Jonathan to forget everything and take a leap. For Ben, it's love at first sight, and he doesn't want to take it slow. He wants to build a life with Jonathan, free from harm and full of laughter. But before they can take the next step, they must protect Jonathan from his possessive, threatening ex. Jonathan must find the courage to confront him and break the chains of his past before he can be truly free to build a future with Ben.

About the author: E E Montgomery wants the world to be a better place, with equality and acceptance for all. Her philosophy is: We can’t change the world but we can change our small part of it and, in that way, influence the whole. Writing stories that show people finding their own ‘better place’ is part of E E Montgomery’s own small contribution.
Thankfully, there’s never a shortage of inspiration for stories that show people growing in their acceptance and love of themselves and others. A dedicated people-watcher, E E finds stories everywhere. In a cafe, a cemetery, a book on space exploration or on the news, there’ll be a story of personal growth, love, and unconditional acceptance there somewhere.

This journal is friends only. This entry was originally posted at http://reviews-and-ramblings.dreamwidth.org/4564065.html. If you are not friends on this journal, Please comment there using OpenID.
Collapse