Frank O'Hara, the son of Russell Joseph O'Hara and Katherine Broderick, was born on March 27, 1926, at Maryland General Hospital, Baltimore and grew up in Grafton, Massachusetts. He attended St. John's High School in Worcester. O'Hara believed he was born in June but was in fact born in March, his parents having disguised his true date of birth because he was conceived out of wedlock. He studied piano at the New England Conservatory in Boston from 1941 to 1944 and served in the South Pacific and Japan as a sonarman on the destroyer USS Nicholas during World War II.

With the funding made available to veterans he attended Harvard University, where artist and writer Edward Gorey was his roommate. Although O'Hara majored in music and did some composing, his attendance was irregular and his interests disparate. He regularly attended classes in philosophy and theology, while writing impulsively in his spare time. O'Hara was heavily influenced by visual art and by contemporary music, which was his first love (he remained a fine piano player all his life and would often shock new partners by suddenly playing swathes of Rachmaninoff when visiting them). His favorite poets were Arthur Rimbaud, Stéphane Mallarmé, Boris Pasternak, and Vladimir Mayakovsky. While at Harvard, O'Hara met John Ashbery and began publishing poems in the Harvard Advocate. Despite his love of music, O'Hara changed his major and graduated from Harvard in 1950 with a degree in English.

A group of New York-based painters and writers had same-sex desire as a recurring theme in their works and created a cultural network amongst themselves during the 1950s and 60s. This creative group included (above from left) Frank O’Hara, John Button, James Schuyler and Joe LeSueur. Frank O’Hara, John Button, James Schuyler, and Joe LeSueur watching television, ca. 1960. John Button papers, ca. 1965–2004. Archives of American Art. Smithsonian Institution.
Frank O'Hara was an American writer, poet and art critic. He was a member of the New York School of poetry. He then attended graduate school at the University of Michigan in Ann Arbor. While at Michigan, he won a Hopwood Award and received his M.A. in English literature 1951. That autumn O'Hara moved into an apartment in New York City with Joe LeSueur, who would be his roommate and sometime lover for the next 11 years. It was in New York that he began teaching at The New School.

In 1951 Joe LeSueur moved into an apartment in New York City with Frank O'Hara, who would be his roommate and sometime lover for the next 11 years.

Joe LeSueur lived with Frank O'Hara until 1965, the years when O'Hara wrote his greatest poems, including 'To the Film Industry in Crisis', 'In Memory of My Feelings', 'Having a Coke with You', and the famous Lunch Poems-so called because O'Hara wrote them during his lunch break at the Museum of Modern Art, where he worked as a curator. (The artists he championed include Jackson Pollock, Joseph Cornell, Grace Hartigan, Jane Freilicher, Joan Mitchell, and Robert Rauschenberg.) The flowering of O'Hara's talent, cut short by a fatal car accident in 1966, produced some of the most exuberant, truly celebratory lyrics of the twentieth century. And it produced America's greatest poet of city life since Whitman.

Joe LeSueur died on May 14, 2001. The New York Times obituary remembers him as: Man of letters. Dear friend of the late Patsy Southgate and Frank O'Hara. Loved by many whose lives he touched.

Larry Rivers was born as Yitzhok Loiza Grossberg to Russian Jewish parents. He changed his name to Larry Rivers in 1940, after being introduced as "Larry Rivers and the Mudcats" at a local New York City pub. From 1940-45 he worked as a jazz saxophonist in New York City, and he studied at the Juilliard School of Music in 1945-46, along with Miles Davis, with whom he remained friends until Davis's death in 1991.

Rivers is considered by many scholars to be the "Godfather" and "Grandfather" of Pop art, because he was one of the first artists to really merge non-objective, non-narrative art with narrative and objective abstraction.

Rivers took up painting in 1945 and studied at the Hans Hofmann School from 1947–48, and then at New York University. He was a pop artist of the New York School, reproducing everyday objects of American popular culture as art. He was one of eleven New York artists featured in the opening exhibition at the Terrain Gallery in 1955.

Frank O'Hara (March 27, 1926 – July 25, 1966) also had a relationship with artist Larry Rivers in the late 1950s and Rivers delivered the eulogy at O'Hara's funeral in 1966. Larry Rivers (August 17, 1923 - August 14, 2002) was an American artist, musician, filmmaker and occasional actor. Rivers resided and maintained studios in New York City, Southampton, New York (on Long Island) and Zihuatanejo, Mexico. Rivers is considered by many scholars to be the "Godfather" and "Grandfather" of Pop art.


This journal is friends only. This entry was originally posted at http://reviews-and-ramblings.dreamwidth.org/2898381.html. If you are not friends on this journal, Please comment there using OpenID. 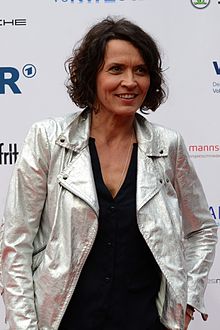 Folkerts participated in the Gay Games 2002 in Sydney and won a silver and bronze medal in the swimming relay. In the single competition she was disqualified because of a false start. In July 2004 she won a bronze medal at the EuroGames in München.

On the stage, in 2005 and 2006 she was the first woman to play Death in Hugo von Hofmannsthal's version of Everyman, Jedermann, at the Salzburg Festival.

In 2005 Ulrike Folkerts published her first book titled "Das macht mich stark", which is an autobiography.

Ulrike Folkerts (born 14 May 1961 in Kassel, Hesse, Germany) is a German actress. She is most famous for playing police officer Lena Odenthal in the German crime television series Tatort. In 2005 Ulrike Folkerts published her first book titled "Das macht mich stark", which is an autobiography. In October 2008 Folkerts, together with her partner Katherina Schnitzler, published her second book: "Glück gefunden" (Happiness found). Folkerts and Schnitzler currently live in Berlin.

This journal is friends only. This entry was originally posted at http://reviews-and-ramblings.dreamwidth.org/4584668.html. If you are not friends on this journal, Please comment there using OpenID.

Things Happen That Way: The Continuing Adventures of Mark Vincent and Quinton Mann (Mann of My Dreams 2) by Tinnean
Gay Contemporary Romance

Quinton Mann and Mark Vincent are settling into a relationship that shouldn’t be possible. After all, Quinn is CIA, while Mark belongs to the WBIS, an agency labeled by others in the intelligence community as being staffed by sociopaths. Somehow, in spite of that, they seem to be making it work. Surprisingly, it isn’t work that separates them but family matters and a friend’s plea for help when his partner is kidnapped. Quinn is off to London, while Mark heads for Los Angeles to solve the kidnapping. Then Mark gets called to Paris by Femme of the Division, where things are not as they seem. Quinn, thinking to meet Mark in Paris, ends up coming to Mark's rescue. Back in the States, Mark fights taking time to recover from being shot while events are happening at the CIA that could endanger both Quinn and his best friend, DB. Between family, friends, and Mark, how will Quinn make the opportunity to talk to Mark about moving in together and even starting a family?

This journal is friends only. This entry was originally posted at http://reviews-and-ramblings.dreamwidth.org/4584828.html. If you are not friends on this journal, Please comment there using OpenID.
Collapse