Blessed John Henry Newman CO (21 February 1801 – 11 August 1890), also referred to as Cardinal Newman, was an important figure in the religious history of England in the 19th century. He was known nationally by the mid-1830s. Newman experienced intense male friendships, the first with Richard Hurrell Froude (1803–1836), the longest with Ambrose St John (1815–1875), who shared communitarian life with Newman for 32 years from 1843 (when St John was 28). Newman wrote after St John's death: "I have ever thought no bereavement was equal to that of a husband's or a wife's, but I feel it difficult to believe that any can be greater, or any one's sorrow greater, than mine." He directed that he be buried in the same grave as St. John: "I wish, with all my heart, to be buried in Fr Ambrose St John's grave — and I give this as my last, my imperative will." (P: John Everett Millais (1829–1896), National Portrait Gallery, NPG 5295. John Henry Newman) 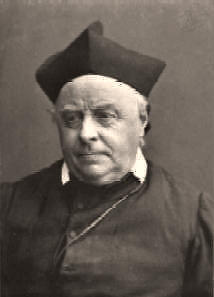 In 1842 Newman withdrew to Littlemore in Oxford, and lived under something like monastic conditions with a small band of followers. The first to join him there was John Dobree Dalgairns. Others were William Lockhart on the advice of Henry Manning, Ambrose St John in 1843, Frederick Oakeley and Albany James Christie in 1845. Buildings were adapted in what is now College Lane, Littlemore, opposite the inn. Called by Newman "the house of the Blessed Virgin Mary at Littlemore" (now Newman College) they had comprised stables and granary for stage coaches. The construction work on this "Anglican monastery" attracted publicity, and much curiosity in Oxford, which Newman tried to downplay, but the nickname Newmanooth (from Maynooth College) was given to the development. (P: Birmingham Oratory. Ambrose St. John, mid-19th century)

John Henry Newman was an important figure in the religious history of England. The Reverend Father Ambrose St. John was an English Oratorian. He is now best known as a lifelong friend of Cardinal Newman. Newman wrote: "I have ever thought no bereavement was equal to that of a husband's or a wife's, but I feel it difficult to believe that any can be greater, or any one's sorrow greater, than mine." In accordance with his expressed wishes, Cardinal Newman was buried in the grave with Fr. St. John.

In accordance with his expressed wishes, Cardinal John Henry Newman & Father Ambrose St. John are buried in the same grave at Rednal Roman Catholic Cemetery, Rednal, England: "I wish, with all my heart, to be buried in Fr Ambrose St John's grave — and I give this as my last, my imperative will.” The pall over the coffin bore his cardinal's motto Cor ad cor loquitur ("Heart speaks to heart".) The two men have a joint memorial stone that is inscribed with the words he had chosen: Ex umbris et imaginibus in veritatem ("Out of shadows and phantasms into the truth"). In preparation for his beatification and canonization, the Catholic Church wanted to transfer his body, but when the grave was opened in 2008, no remains were found due to his body being buried in a wooden coffin in very damp ground.


This journal is friends only. This entry was originally posted at http://reviews-and-ramblings.dreamwidth.org/4216037.html. If you are not friends on this journal, Please comment there using OpenID.

It's not the size of the dog in the fight, it's the size of the fight in the dog. Bannon's Gym, Book 3 As a child, Tom Delaney did the best he could to protect his mother from his abusive father, but her eventual suicide left him a guarded and wary man who's still carrying around a metric ton of baggage. At Bannon's Gym, Tom learned how to take back his power, and found love with fellow mixed martial arts fighter Travis Gallagher. Yet Tom can't bring himself to take their relationship to the next level. Not if moving in together means leaving behind Gloria, his surrogate mom, who's desperately ill. When Gloria's son, Eddie, hires an out-of-work nurse to care for Gloria, Tom is out of excuses-and afraid he's being pushed out of his family of choice. That fear explodes in a violent sparring session that leaves Travis with a broken nose and Tom on the brink of getting booted out of Bannon's Gym for good. When tragedy strikes, Tom realizes it'll take more than fists to conquer his fears, or he risks losing everything-his fighting career, his family, and the man he loves. Warning: Sweat- and testosterone-drenched alpha males ahead! More angst than an entire season of Downton Abbey! Wear a helmet-this could get messy!

This journal is friends only. This entry was originally posted at http://reviews-and-ramblings.dreamwidth.org/4590223.html. If you are not friends on this journal, Please comment there using OpenID.
Collapse