Mike Peterson is determined to break the gambling habit that resulted in two failed marriages, no money, no job, plus almost getting himself and his brother killed when loan sharks came looking for their money. In addition, he’s recently been having some doubts about his own sexuality. When his gay brother suggests he get in touch with an old friend, recently out police officer Larry Bertoli, Mike is at first leery of the idea, and their first meeting isn’t exactly ideal.

They decide to meet again and this time more of what they are and what they could mean to one another is revealed during their time together. They begin a tentative friendship that graduates to a first, fumbling attempt at romance. Can they find the secure relationship they both want, or will Mike’s addiction and lack of self-esteem hinder what could possibly be salvation for both men?

The story moved forward enough to keep me invested and I liked the characters, flaws and all.  I can imagine that a lot of men who discover themselves later in life can relate to stories like this one.

This journal is friends only. This entry was originally posted at http://reviews-and-ramblings.dreamwidth.org/4546097.html. If you are not friends on this journal, Please comment there using OpenID.

All Edward Conway needs is someone to love, and in sexy Puerto Rican Alex Martinez, he may have found that someone—until a wild party threatens to take everything from him. When Edward Conway came out to his family he never imagined their reaction would be to shut him out of their lives. Searching for acceptance he leaves his hometown hoping to find a new life in Los Angeles. Finally daring to enter a gay bar by himself, he meets Alex Martinez, a celebrities publicity agent, and the two men connect on all kinds of levels. Despite the pressure of Alex’s job, which takes him out of town soon after he and Edward connect, Edward feels he may just have met the man who can give him something to live for. Things look good until Edward’s wild roommate Troy, needs a lift to a party where ‘sex, drugs and rock’n’roll’ are the order of the day. Reluctantly Edward agrees to drive Troy to the party, but before he can leave he becomes the victim of a vicious incident that could shatter the hopes he had for the future. Alex is there to lend support but he is haunted by a tragic past, and in the present is torn between an old loyalty and the wish to make Edward a lasting part of his life.

The story was well written with great characters to follow.  One thing with these types of stories that I keep seeing is that in all the gay relationships, both guys are versatile, meaning no one is just top or bottom.  That is not so common in the circles that I grew up socializing in. I mentioned this specific question to one of my M4M author friends and was told that is how the majority of M4M readers like the stories to play out. Just saying.

This journal is friends only. This entry was originally posted at http://reviews-and-ramblings.dreamwidth.org/4547320.html. If you are not friends on this journal, Please comment there using OpenID. 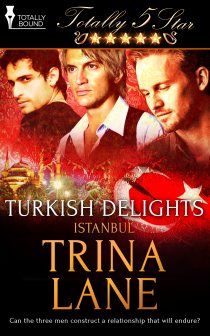 Three very different men from three different countries look to build a love greater than any Wonder of the World.

Project manager Garrett Sloan builds majestic hotels for the rich and famous around the world, but when it comes to love, all his relationships seem to crumble. His latest project lands him in Istanbul, where the desire he’s held for a certain French architect heats up under the Middle Eastern sun, and his resolve never to mix business with pleasure melts beneath the added hot stare and skilled hands of a Turkish mason.

The three men discover they want to build a relationship to stand the test of time—much like Kyle LaFleure’s buildings and Emir Şahin’s stonework. As the bonds between Garrett and his partners grow stronger and more complex, they work to lay the perfect foundation on which to build a lasting relationship. Can the three men construct a relationship that will endure? Or will their love reach its zenith when their shared task of finishing the ultimate Ottoman luxury hotel reaches its completion?

An interracial ménage à trois relationship.  That was different and interesting to see how that played out. The blending was good but it was a bit difficult when one of the characters would speak in their native tongue without full explanation of what they were saying.  A minor thing for some, but I love the idea of different languages and cultures, but at times it threw me off.  Still, this was an interesting story.  It was nice that they had a happily ever after, for now.

This journal is friends only. This entry was originally posted at http://reviews-and-ramblings.dreamwidth.org/4520053.html. If you are not friends on this journal, Please comment there using OpenID.

According to legend, when humankind is at its most desperate, the goddess Sirius will send three of the most powerful werewolf shifters ever created to save mankind. However, because they are so powerful, they will need a fourth to complete them, to calm them and help them reach their full potential.

Aden, a young were, has been his pack's omega ever since, at the age of fifteen, he didn't shift like everyone else. Caught, reviled, and tortured because of his empathic abilities, he knew on the night he was told to run as sport for the pack hunters that it would end in his death. What he didn't know, however, was that on the same night he'd also meet the love of his life and a pathway to answers, because Aden is far more than just a pack omega.

What begins as a hunt soon becomes a new adventure as Aden discovers that he has not only one, but three destined mates, and his role as lover is far more than trivial. The fate of all humankind rests upon it.

This is exactly the type of book I really enjoy. A well thought out plot that is story driven rather than sex scenes with a weak plot filling the gap between them. The pacing was great and the characters were all well defined including the secondary characters. I really enjoyed this book and will definitely be reading more of this series.

I thought I was burned out on romance books about vampires and werewolves. This novel hit me like a shot of adrenaline. I'm definitely looking forward to the next installment in this series.

This is a well done shifter story that will pull you in from the beginning.  I liked the way the author brings all four men together, but be prepared for some angst.  There were a couple of times I found myself close to tears.  While the story ends well, it is obvious that there is more to tell.  I cannot wait for the second story to show up.

Overall, it was a good story.  I was a bit annoyed with it at times, but that is what made the story a good read.  Looking forward to reading the whole series.

I really enjoyed this book. The plot kept me engaged from beginning to end. There was just enough resolution to make me satisfied but also a cliff hanger to have me anticipate book 2. Very good job of bring the reader into the world created. I loved the varied personalities but how they worked as cohesive unit. I really became attached to Aden. However this continual doubt in his mates all the way up to the end got a little old.

This journal is friends only. This entry was originally posted at http://reviews-and-ramblings.dreamwidth.org/4696024.html. If you are not friends on this journal, Please comment there using OpenID.
Collapse