The monastery of San Salvador de Celanova is a religious complex in Celanova, Galicia, Spain. It is located near Allariz and 14 miles (23 km) from Ourense.

It was founded By St. Rosendo in the year 936 on lands belonging to his brother, Count Froila Gutiérrez. St. Rosendo, Bishop of Mondoñedo and Iria, was appointed Viceroy of Galicia by Ordoño III, but soon withdrew to the Monastery of Celanova, of which he was abbot until his death in the year 977.

The Monastery achieved considerable importance in this district of Ourense. Its abbot enjoyed, among others, the titles of Count of Bande and Marquis of Torre de Sande. The monastery´s history followed the path of other Galician monasteries. After a period of glory, there came a time of abandon and corruption. Mostly in the period of the Commendatory abbots, when the monks "had baths served by Moors". When the Congregation of Castile was incorporated, discipline and study were restored and ancient glory was recovered. In fact, Charles I considered withdrawing to Celanova before deciding on Yuste. With the 19th-century disestablishment, the Monastery was abandoned. The Church passed to the parish of San Breixo and the monstery building was put to other uses.

The church facade was finished in the year 1653, although in the 18th century it underwent several modifications. The main doorway is flanked by four pairs of columns with Corinthian capitals supporting a splendid cornice. Above the doorway, there is a niche displaying St. Benedict. On the upper part of the facade, the Monastery´s stone arms can be seen. Inside the church, we can see a perfect Baroque work that some consider the finest in Galicia. It was designed by the Master-architect Melchor de Velasco in a basicaly Classical conception although there are clear Baroque influences on the ornamentation. It stands on a Latin-cross ground plan, with three longitudinal aisles and a transept. A balconey runs round the whole church. The nave is covered in a splendid stone coffered ceiling. Over the transept, there is a fine ornamented vault, with garlands converging on the small dome. The centre of the nave is occupied by the lower choir, in Baroque style, attributed to F. Castro Canseco, who was also responsible for Tuy Cathedral. It consists of 38 seats on the upper part and 28 on the lower. On the upper part, the lives of the Benedictine saints are displayed on the backs of the seats; and on the lower, there are scenes from the life of the monastery and the Order´s founders. The upper choir is older, in Plateresque-Ogival style from the late 15th century. It is the only complete Gothic choir conserved in Galicia. The retable at the main altar is made up of four Solomonic columns supporting a cornice, above which there is a quarter-sphere vault. Standing out on the central section is a large panel with a relief of the Transfiguration.

By Dirkvde (Own work) [CC BY-SA 3.0 (http://creativecommons.org/licenses/by-sa/3.0) or GFDL (http://www.gnu.org/copyleft/fdl.html)], via Wikimedia Commons

The monastery building went through a series of different construction stages. One of the most interesting pieces is the old (or "procession") cloister, which lies behind the Monastery facade. It dates from the 16th century, finished with Baroque ornamention, of which we could highlight the giant gargoyles. On the consoles that support the ribbing of the vaults, we can see busts of Charles V, Catherine, Philip II, Juan de Austria and others. From the cloister, we can see the splendid dome, with a polygonal balustrade surrounding the cupola and Abades or Campanas Tower.

The new Cloister, more simple, dates from the 18th century, in Neo-Classical style. It is worth mentioning the running balcony on the lower part, which gave access to novice´s cells. It is supported by large consoles, reminiscent of the balconies on some Galician mansions, and was known as "o poleiro". 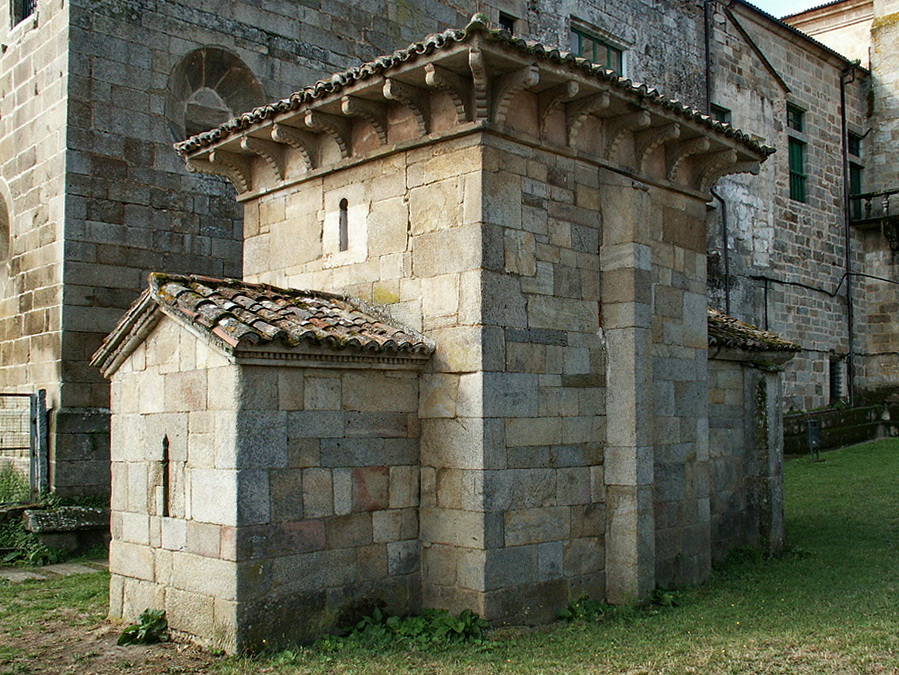 In the Middle Ages, a same-sex marriage between two men, Pedro Díaz and Muño Vandilaz, was recorded on 16 April 1061 in the Galician municipality of Rairiz de Veiga in Spain. They were married by a priest at a small chapel. The historic documents about the church wedding were found at Monastery of San Salvador de Celanova. It is not known whether the priest was aware of the gender of both.

This journal is friends only. This entry was originally posted at http://reviews-and-ramblings.dreamwidth.org/4774458.html. If you are not friends on this journal, Please comment there using OpenID.
Collapse