Blurb: Single father Jack Jones is in dire need of a new nanny. His five year old son Nathan is legally blind, he has twin baby girls arriving in less than two months and the girl currently working for him is leaving at Thanksgiving to go home and continue her higher education. If Mannies Incorporated doesn’t come up with a viable candidate soon, he’s not sure what he’s going to do.
Dan Miller is on the hunt for a new job. He’s had some great placements with Mannies Incorporated, many as Manny to multiple birth families to get them over the hump. He even has experience with special needs children, so the job he’s interviewing for looks like it’s right up his alley.
When Dan arrives at Jack’s house, he discovers that this Jack Jones is his Jack Jones, the man he was in love with during college, and who broke up with Dan because Dan wanted children. Will Dan and Jack be able to put the past behind them and work together, or will their past keep them from having a future together?

Meet the author: Often referred to as "Space Cowboy" and "Gangsta of Love" while still striving for the moniker of "Maurice," Sean Michael spends his days surfing, smutting, organizing his immense gourd collection and fantasizing about one day retiring on a small secluded island peopled entirely by horseshoe crabs. While collecting vast amounts of vintage gay pulp novels and mood rings, Sean whiles away the hours between dropping the f-bomb and pursuing the kama sutra by channeling the long lost spirit of John Wayne and singing along with the soundtrack to "Chicago."
A long-time writer of complicated haiku, currently Sean is attempting to learn the advanced arts of plate spinning and soap carving sex toys.
Barring any of that? He'll stick with writing his stories, thanks, and rubbing pretty bodies together to see if they spark.

1) What’s the easiest thing about writing?
The actual writing part. I love writing. It is the best thing in the world. I love listening to the characters who live in my head as they tell me their story. It makes me happy. And I love that there are readers for what I write. That also makes me happy.

2) Name one author (living or dead) you’d like to write with?
I would love to write with William Shakespeare. Hell, just watching his process would be fun. He was very ribald and earthy and I think he would get a kick out of the explicit works available these days.

3) Tell us about your cover and how it came about.
The amazing Kris Norris did the cover for Three to Get Ready and I think she did a fabulous job. I told Kris what the book was about, who the characters were and what was important for the cover, then Kris sent back a sample and I was pleased with how my ideas were interpreted and made better. And I’m very happy with the final result.
I also needed a new logo for the series and I was so happy with the one that Kris came up with that I wound up asking for the logo so I could put it on t-shirts, ball caps, tote bags…

4) Is this book part of a series? Do you have ideas that could make it into a series? If it is a series, tell us a little about it.
Three to Get Ready is a part of the Mannies Incorporated series. The books can actually all be read as stand alones, but each one features a manny who the family needing the help has procured through the Mannies Incorporated company, which was formed by the two men who stared in the original book.
I have lots of ideas to continue the series and hope to be able to write one a year.

Thank you again for having me. A happy 2016 to everyone!

This journal is friends only. This entry was originally posted at http://reviews-and-ramblings.dreamwidth.org/4777288.html. If you are not friends on this journal, Please comment there using OpenID.

Sanssouci is the former summer palace of Frederick the Great, King of Prussia, in Potsdam, near Berlin. It is often counted among the German rivals of Versailles. While Sanssouci is in the more intimate Rococo style and is far smaller than its French Baroque counterpart, it too is notable for the numerous temples and follies in the park. The palace was designed/built by Georg Wenzeslaus von Knobelsdorff between 1745 and 1747 to fulfill King Frederick's need for a private residence where he could relax away from the pomp and ceremony of the Berlin court. The palace's name emphasises this; it is a French phrase (sans souci), which translates as "without concerns", meaning "without worries" or "carefree", symbolising that the palace was a place for relaxation rather than a seat of power.

Sanssouci is little more than a large, single-story villa—more like the Château de Marly than Versailles. Containing just ten principal rooms, it was built on the brow of a terraced hill at the centre of the park. The influence of King Frederick's personal taste in the design and decoration of the palace was so great that its style is characterised as "Frederician Rococo", and his feelings for the palace were so strong that he conceived it as "a place that would die with him". Because of a disagreement about the site of the palace in the park, Knobelsdorff was fired in 1746. Jan Bouman, a Dutch architect, finished the project.

During the 19th century, the palace became a residence of Frederick William IV. He employed the architect Ludwig Persius to restore and enlarge the palace, while Ferdinand von Arnim was charged with improving the grounds and thus the view from the palace. The town of Potsdam, with its palaces, was a favourite place of residence for the German imperial family until the fall of the Hohenzollern dynasty in 1918. 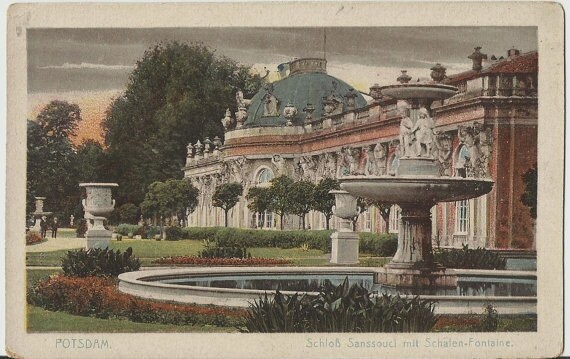 After World War II, the palace became a tourist attraction in East Germany. Following German reunification in 1990, Frederick's body was returned to the palace and buried in a new tomb overlooking the gardens he had created. Sanssouci and its extensive gardens became a World Heritage Site in 1990 under the protection of UNESCO; in 1995, the Foundation for Prussian Palaces and Gardens in Berlin-Brandenburg was established to care for Sanssouci and the other former imperial palaces in and around Berlin. These palaces are now visited by more than two million people a year from all over the world. 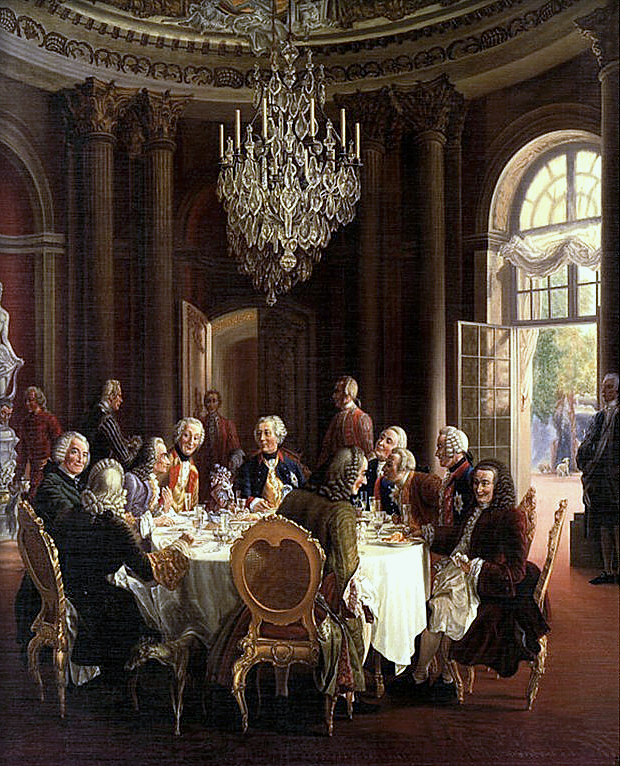 Die Tafelrunde by Adolph von Menzel. The oval domed "Marble Hall" is the principal reception room of the palace. On the left side, in the purple coat, sits Voltaire; the other guests are Casanova, Marquis d'Argens, La Mettrie, the Keiths, Von Rothenburg, Von Stille and Francesco Algarotti.

Voltaire, long guest in the royal palace of Sans-Souci in Potsdam, left unequivocal evidence on Frederick II The Great’s homosexuality, arriving, in a letter of 1 December 1740, to define him “the respectable, unique and lovable bitch”.
On 15 June 1743 he wrote, addressing Frederick II as "Caesar":
I love Caesar in the embrace
Of his mistress that gives up to him;
I laugh and I'm not offended
to see him, young and handsome,
above and below in Nicomede.
I admire him more than Cato,
Since he is tender and magnanimous.
And in the same letter Voltaire wrote: "Your Majesty is with me a civettina [a coquette], very seductive".

Always him, talking about the Court of Potsdam with a female correspondent on 17 November 1750 specifies:
"I know, my dear child, all that is said about Potsdam around Europe. Especially women are wild (...) but this does not concern me (...). I well see, my dear child, that this country is not for you. I see that people spend ten months a year in Potsdam. This is not a Court, is a retreat from which the ladies are banned. And yet we are not in a monastery. Considering everything, wait for me in Paris ".

Voltaire and Frederick II of Prussia in Sanssouci (detail) - c. 1900

The meaning of the allusions by Voltaire is made clear by another witness, Giacomo Casanova (1725-1798), who wrote in his memoirs that he saw in Potsdam Frederick II drive the first battalion of his soldiers, all with a gold watch donated from him for having the courage to subdue him... like Caesar had made with Nicomedes. The thing, he assured, was no one mystery.

Casanova also tells, kindly amused, to have met in Wroclaw an Italian canon, Bastiani, who was a “Venetian abbot whom the King of Prussia had made the fortune. (...) He showed me all the sweet cards he had received from the King of Prussia before his promotion to the canon; this monarch was absolutely in love with Bastiani, and he wanted to become his woman, rewarding him, as a King".

This journal is friends only. This entry was originally posted at http://reviews-and-ramblings.dreamwidth.org/4777660.html. If you are not friends on this journal, Please comment there using OpenID.