Linton Park, formerly Linton Place or Linton Hall, is a large 18th-century country house in Linton, Kent, England. Built by Robert Mann in 1730 to replace an earlier building, the house and estate passed through the ownership of several members of Mann's family before coming into the Cornwallis family. The house was enlarged to its current size in 1825.

The house sits in a prominent location, part way down a south-facing slope which provides excellent views of the grounds and the Weald beyond. Gardens close to the house contain formal walks laid out in 1825 with specimen trees planted then and later.

The house is a Grade I listed building and the garden and park is listed Grade II*. Other buildings and structures in the park are also listed.

Sir Horace (Horatio) Mann, 1st Baronet KB (c.25 August 1706 - 6 November 1786), diplomat, was a long standing British resident in Florence. He was the second son of Robert Mann (1678–1751), a successful London merchant, and his wife. He was brought up at Chelsea, and educated at Eton College and later, briefly, at Clare College, Cambridge.

He kept an open house for British visitors at Florence, inviting them for conversazione when there was no performance at the theatre. His generosity and kindness was universally acknowledged, although his close friendship with the painter Thomas Patch (expelled from Rome after a homosexual incident) and with the effete John, 2nd Earl Tylney, reflected on his reputation. He met Horace Walpole (to whom he was distantly related, Mann's great-great-grandmother was the sister of an ancestress of Walpole) in 1739, and conducted a now-renowned correspondence with him over forty years, though they last met in 1741. The correspondence was published by Lord Dover in 1833.

William, 2nd Earl Fitzwilliam wrote that: “Sir Horace is the most finical man in the world: if you speak a little loud, he can’t bear it, it hurts his nerves, he dies – and he vomits If you eat your petite pate before your soup: take him as he is, without least notice, he is perfect character for the stage. He has been so long out of England, that he had lost the manliness of an Englishman, and has borrowed the effeminacy of Italy. But with all his little airs, he is a good kind of man, and is very civil.” 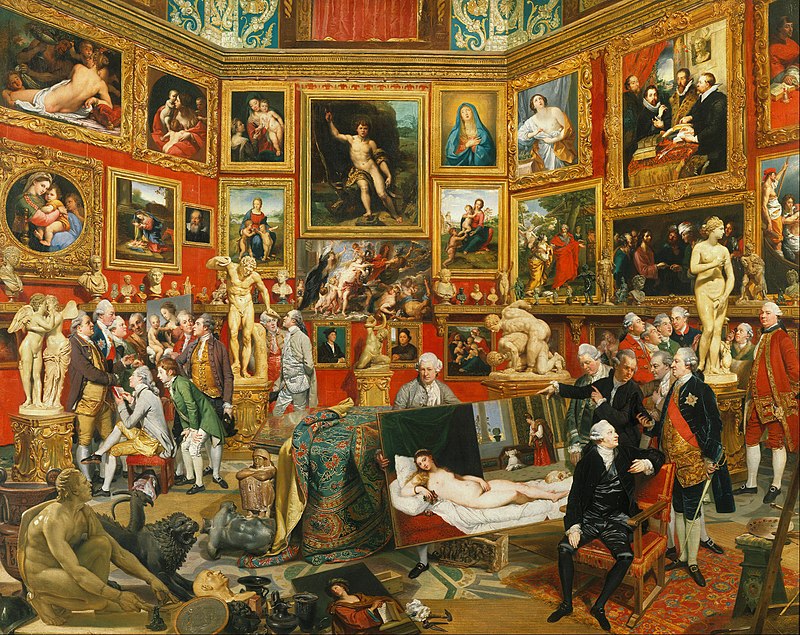 Detail from Tribuna of the Uffizi. On the right side, from left to right:Mr Gordon, Patch, Sir John Taylor Bt, Sir Horace Mann and in front, sitting, Felton Hervey (brother of John Hervey, 2nd Baron Hervey)

In 1775, on the death of his elder brother, Edward Louisa Mann, he inherited the Linton Park estate which his father had bought at Linton, Kent.

He died unmarried in Florence on 6 November 1786. His nephew Horace inherited his baronetcy by special remainder and also acted as Chargé d'affaires until the arrival of his replacement.


This journal is friends only. This entry was originally posted at http://reviews-and-ramblings.dreamwidth.org/4779219.html. If you are not friends on this journal, Please comment there using OpenID.
Collapse