Thank you for visiting BA’s blog tour! This is a special event for the blogs taking part as we want to help BA who is having medical issues right now. It’s our hope that we can help make the book a success to help alleviate some of the medical bills she and her wife will be receiving.

Blurb: When Kris Cerny walks back into Two Spirits, the art gallery he owns with Josh McPhee, all he wants is a clean break. Austin's booming real estate market means the building he bought years ago is worth a fortune, and with the sale, he and Josh can finally go their separate ways. They won't be reconciling, right? Josh may be sober now, but an addict is always going to be an addict, and Kris can't take that chance again.
Josh isn't willing to sell. Not yet. He's discovered a new artist in Santa Fe he knows will put Two Spirits in the black, and if he can just make a success of the gallery, maybe he can earn Kris's respect, if not recapture his love. He needs Kris to give him time for one more buying trip, one more gallery show. Josh wants nothing more than a final chance to make things right. Kris agrees to let Josh have this last ditch effort on one condition-- he wants to go along for the ride. On the way Josh hopes they'll find the next big thing in the art world as well as peace, forgiveness, and a love he thought was lost forever.

Meet the author: Texan to the bone and an unrepentant Daddy's Girl, BA Tortuga spends her days with her basset hounds, getting tattooed, texting her sisters, and eating Mexican food. When she's not doing that, she's writing. She spends her days off watching rodeo, knitting and surfing porn sites in the name of research. BA's personal saviors include her wife (still amazing to say that), Julia Talbot, her best friend, Sean Michael, and coffee. Lots of coffee. Really good coffee.
Having written everything from fist-fighting rednecks to hard-core cowboys to werewolves, BA does her damnedest to tell the stories of her heart, which was raised in Northeast Texas, but has gone to the high desert mountains and fallen in love. With books ranging from hard-hitting GLBT romance, to fiery ménages, to the most traditional of love stories, BA refuses to be pigeon-holed by anyone but the voices in her head.

"Hey there! I’m the luckiest girl on Earth – I’m married to the woman of my dreams, I’ve got the best job in history and I live in the New Mexico mountains. I’ve been publishing romance novels for… whoa. Many years.
Many.
Refired is the story of recovering alcoholic, Josh McPhee, and Kris Cerny, high-powered businessman and rancher – two former lovers that own a failing Austin art gallery together."

1) Tell us something no one else knows about your characters.
Hipster Josh is a huge Air Supply fan. Kris was terrified of horses when he was a little bitty cowboy.

3) Have you ever co-written with someone before?
I have. I’ve written with my wife, with my best friend, with my evil twin. I love co-writing and oftentimes I use the hell out of their brains when I’m stuck.

4) What is the most difficult part of writing for you?
Not taking edits personally. It’s such a hard lesson – to understand when the comments are personal, when they’re not. I’m better at it, but I have to work at it, constantly.

This journal is friends only. This entry was originally posted at http://reviews-and-ramblings.dreamwidth.org/4783065.html. If you are not friends on this journal, Please comment there using OpenID.

The Tegel Palace (or Humboldt Palace), originally a Renaissance manor house from 1558 and a hunting lodge of Elector Frederick William of Brandenburg, was bequested to the Humboldt family in 1797. Alexander von Humboldt and Wilhelm von Humboldt lived here for several years. In 1824 Wilhelm had the palace rebuilt in a Neoclassical style by Karl Friedrich Schinkel. In the park is a tomb, where Alexander, Wilhelm and other members of the Humboldt family are buried. From 1927 until 1931 Tegel Palace was the site of a sanatorium, founded by the psychoanalyst Ernst Simmel (1882-1947).

From 1898 on Tegel was the seat of the Borsig-Werke steam locomotive manufacturing company until it moved to Hennigsdorf in Brandenburg in 1931.
Between 1930 and 1934 an artillery firing range in the district was used by the Verein für Raumschiffahrt for experiments with liquid-fueled rockets. The principal names involved were its leader Rudolf Nebel and other staff members Hermann Oberth and Wernher von Braun.
Tegel was the site of a medium wave broadcasting station from 1933 to 1948. A wire hung in a wooden tower served as an antenna. This tower was demolished as part of the construction of Tegel International Airport at the end of 1948.

Friedrich Wilhelm Heinrich Alexander von Humboldt Humboldt (1769-1859) was a Prussian geographer, naturalist, explorer, and influential proponent of romantic philosophy. He was the younger brother of the Prussian minister, philosopher, and linguist Wilhelm von Humboldt (1767–1835). Humboldt's quantitative work on botanical geography laid the foundation for the field of biogeography. Humboldt's advocacy of long-term systematic geophysical measurement laid the foundation for modern geomagnetic and meteorological monitoring.
Much of Humboldt's private life remains a mystery because he destroyed his private letters. While a gregarious personality, he may have harbored a sense of social alienation, which drove his passion for escape through travel. 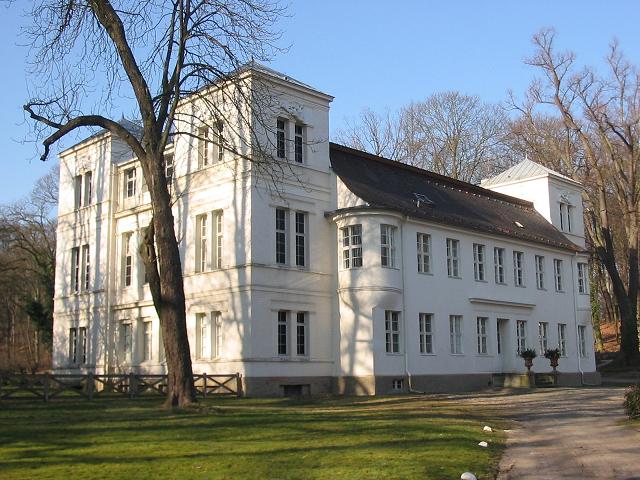 Humboldt never married: while he was charmed by a number of attractive women, including Henriette, the wife of his mentor Marcus Herz, his sister-in-law Caroline von Humboldt stated "nothing will ever have a great influence on Alexander that doesn't come through men." His life was marked by a pattern of intense male friendships, which sometimes tipped over into romantic passion.
As a student he became infatuated with Wilhelm Gabriel Wegener, a theology student, penning a succession of letters expressing his "fervent love". At 25 he met Reinhardt von Haeften, a 21 year old lieutenant, with whom he lived and travelled with for two years, and to whom he wrote in 1794: "I only live through you, my good precious Reinhardt." When von Haeften became engaged, Humboldt begged to remain living with him and his wife: "Even if you must refuse me, treat me coldly with disdain, I should still want to be with you...the love I have for you is not just friendship or brotherly love, it is veneration."
A travelling companion in the Americas for five years was Aimé Bonpland, and in Quito in 1802 he met the Ecuadorian aristocrat Carlos Monúfar, who travelled with Humboldt to Europe and lived with him. In France, Humboldt travelled and lived with the physicist and balloonist Joseph Louis Gay Lussac. Later he had a deep friendship with the married French astronomer François Arago, whom he met daily for 15 years.
Humboldt once wrote "I don't know sensual needs." However, a pious travelling companion, Francisco José de Caldas, accused him of frequenting houses in Quito where "impure love reigned", of making friends with "obscene dissolute youths", of giving vent to "shameful passions of his heart", and dropping him to travel with "Bonpland and his Adonis"(Monúfar).
Humboldt inherited a significant fortune, but the expense of his travels, and most especially of publishing (thirty volumes in all), had by 1834 made him totally reliant on the pension of King Frederick William III. Although he preferred living in Paris, by 1836 the King had insisted he return to Germany. He lived with the Court at Sans Souci, and latterly in Berlin, with his valet Seifert, who had accompanied him to Russia in 1829.
Four years before his death, Humboldt executed a deed of gift transferring his entire estate to the dominating Seifert, who had by then married and set up a household near Humboldt's apartment. Humboldt had become godfather to his daughter. The scale of the bequest has always drawn speculation, especially as Seifert was some thirty years younger, and introducing lower class partners into households under the guise of servants was then a common practice.
In 1908, the sexual researcher Paul Näcke gathered reminiscences from homosexuals, including Humboldt's friend the botanist Karl Bolle, then 90 years old: some of the material was incorporated by Magnus Hirschfeld into his 1914 study Homosexuality in Men and Women. However, speculations about Humboldt's private life and possible homosexuality continue to remain a fractious issue amongst scholars, particularly as earlier biographers had portrayed him as "a largely asexual, Christ-like Humboldt figure...suitable as a national idol."

This journal is friends only. This entry was originally posted at http://reviews-and-ramblings.dreamwidth.org/4783200.html. If you are not friends on this journal, Please comment there using OpenID.