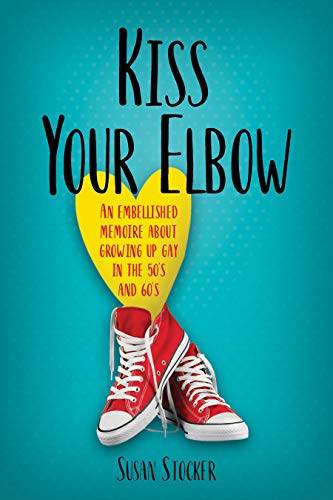 Kiss Your Elbow: An Embellished Memoire about Growing Up Gay in the 50's and 60's

"This was a fantastic memoir. It was funny, poignant and relatable. I didn't want to stop reading it and I honestly am not a fan of Memoirs! Can't wait for book number two to continue the story!"

"Loved this story from start to finish. Great storytelling style. Felt like I was literally along for the ride. Had me smiling and relating. Great character portrayals. "

Growing up in the 50's and 60's was a hip, groovy, and a laid-back kind of a life for most young teenage girls. Except if you were taller than most adults, completely out of it because your mother had total control of your life, and discovered you were different than all your friends, it was more like a complete social wipeout.
Susan was tall, athletic, and popular in elementary school and it never occurred to her life would change drastically when she entered junior high school. But by the first weekend in the new school year it was clear her easy-going life had changed forever.

This journal is friends only. This entry was originally posted at https://reviews-and-ramblings.dreamwidth.org/5250885.html. If you are not friends on this journal, Please comment there using OpenID.

The Fox, the Dog, and the King (The Cassie Tam Files Book 2)

"This author does one of my favorite things as a reader: puts me right into the action and trusts me to pay attention. And I did. The writing style is uncomplicated and engaging, with a main character I liked pretty much immediately and side characters who are unique and complex. Though the clarity of setting suffers a little at the beginning, by the halfway point, I was well settled in this fascinating futuristic society and trooping right along with Caz as she navigates the complex underworld of New Hopeland. This is the second book in a series, but the author is very clever about delivering what would otherwise have been a ton of exposition, using conversation and character relationships to show me who these people are and what their history is with each other rather than trying for a general info dump, which would have lost points with me. A second book in a series can be a risky choice for an awards submission, but this book can easily stand alone, with fully developed characters and an appealing mystery: close to cozy, but with a sinister edge. I appreciate being trusted by the author. I would love to go back and read the first book, as well as any that follow."

New Hopeland City may have been built to be the centerpiece of the technological age, but some remnants of the old world still linger. The tools of the trade have changed, but the corruption remains the same, even in the criminal underworld …

When PI Cassie Tam and her girlfriend Lori try to make up for their recent busy schedules with a night out at the theatre to watch the Tech Shift performer Kitsune, the last thing they expected was for Cassie to get a job offer. But some people are never off the clock, and by the end of the evening, Cassie has been drawn into a mundane but highly paid missing pet case. Unfortunately, in New Hopeland City, even something as simple as little lost dog can lead you down some dark paths.

Until now, Cassie wasn’t aware that there even was a rabbit hole, let alone how far down it goes.

This journal is friends only. This entry was originally posted at https://reviews-and-ramblings.dreamwidth.org/5232031.html. If you are not friends on this journal, Please comment there using OpenID.