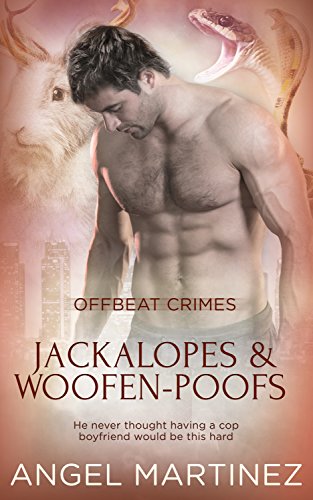 "This has got to be one of the most unconventional, snarky, hilarious, unusual, charming, engaging, fascinating, and sexy books I've read in I don't know how long!!"

Hoax animals and a consulting vampire on the prowl—ACO Jason Shen never thought having a cop boyfriend would be this hard.

All Animal Control Officer Jason Shen ever wanted was a quiet life of rescuing lost kittens and helping animals in need. Having a paranormal cop boyfriend guarantees an end to the quiet part. What at first seems like a random encounter with jackalopes in the park might be more than chance and when State Paranormal sends a handsome, charming vampire to consult with the Seventy-Seventh, he finds his relationship with Alex on shaky ground.

Officer Alex Wolf hoped his humaning skills were improving but now he can’t unravel the strange politics at State Paranormal or why Jason’s family seems to hate him. There’s no time to puzzle things out, either. Bizarre animals are loose in the city, Jason’s acting strange—and is the vampire captain from State flirting with him? Wolf’s going to have to keep his head in the game if he’s going to have any chance of putting the pieces together and keeping the city safe from the strange critters terrorizing its streets.

This journal is friends only. This entry was originally posted at https://reviews-and-ramblings.dreamwidth.org/5233026.html. If you are not friends on this journal, Please comment there using OpenID.

This journal is friends only. This entry was originally posted at https://reviews-and-ramblings.dreamwidth.org/5295067.html. If you are not friends on this journal, Please comment there using OpenID.