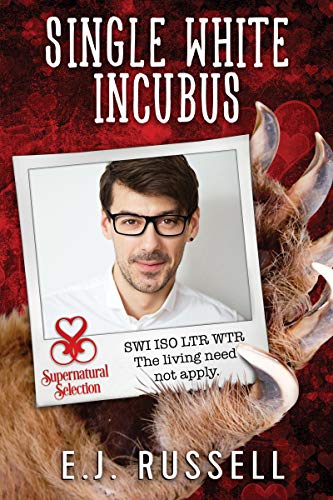 "When I read the blurb, I wasn’t very excited about reading the book itself. But the story surprised and enchanted me so much that I not only bought a copy, but I’m reading the second in the series right now. The characters of the gregarious bear shifter and the introverted, fussy incubus were so well drawn that they transcended fantasy and became very real to me. The paranormal dating agency mix-up, while laughably ludicrous, was the right touch of silliness to give the story a light touch. That the story was so well-written that it flowed easily meant it became one of those books that’s nearly impossible to put down. All in all, what looked on the surface as a long, difficult reading task was in reality a delightful experience. Thank you!"

"So glad I made sure to read these last two books in order by the same author. Very fun read with exciting characters. The conflict was very realistic in concern to a mixed-match couple who found what they needed instead of what they thought they wanted."

"This was a super fun, very cute, quick read. It's not often Bear Shifters get good representation, but Russell did a commendable job with Ted. I wasn't sure about Quentin's character, but I grew to like him. I did find the incubus demon culture was an interesting take, and I loved Pauline, the grandmother. Plowed through this book in two days. Definitely a page-turner! Loved seeing David and Alun from Cutie and the Beast in this story too. It's great when other characters are pulled in."

Does a bear shift in the woods?

Well, partially. That was what got grizzly shifter Ted Farnsworth into trouble. He wasn’t trying to break the Secrecy Pact. He just wants people to see the real him. So he signs up with the mate-matching service Supernatural Selection—which guarantees marriage to a perfect partner. Not only will Ted never be lonely again, but once his new beaver shifter husband arrives, they’ll build Ted’s dream wilderness retreat together. Win-win.

Quentin Bertrand-Harrington, scion of an incubus dynasty, has abstained from sex since nearly killing his last lover. When his family declares it’s time for him to marry, Quentin decides the only way not to murder his partner is to pick someone who’s already dead. Supernatural Selection finds him the ideal vampire, and Quentin signs the marriage agreement sight unseen.

But a mix-up at Supernatural Selection contracts Quentin with Ted. What’s Ted supposed to do with an art historian who knows more about salad forks than screwdrivers? And how can Quentin resist Ted’s mouthwatering life force? Yet as they work together to untangle their inconvenient union, they begin to wonder if their unexpected match might be perfect after all.

This journal is friends only. This entry was originally posted at https://reviews-and-ramblings.dreamwidth.org/5280081.html. If you are not friends on this journal, Please comment there using OpenID.
Collapse