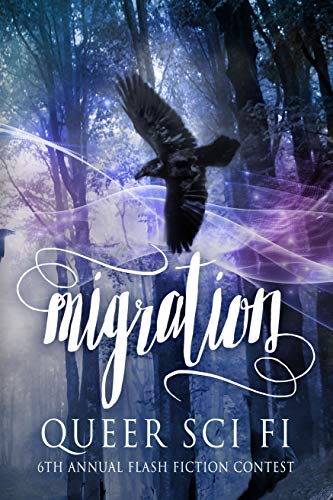 "When I opened this book and discovered that the stories were all 300 words or less, I was a bit skeptical but OMGs! How wrong was I for doubting! These were so awesome to read, each with their own unique flair, most with me wanting to continue. I do hope the authors will extend their stories to give them more meat to the (stories) bones. Awesome!"

1) Seasonal movement of animals from one region to another.

2) Movement of people to a new area or country in order to find work or better living conditions.

3) Movement from one part of something to another.

Three definitions to inspire writers around the world and an unlimited number of possible stories to tell. Here are 120 of our favorites.

Migration feaures 300-word speculative flash fiction stories from across the rainbow spectrum, from the minds of the writers of Queer Sci Fi.

This journal is friends only. This entry was originally posted at https://reviews-and-ramblings.dreamwidth.org/5308341.html. If you are not friends on this journal, Please comment there using OpenID. 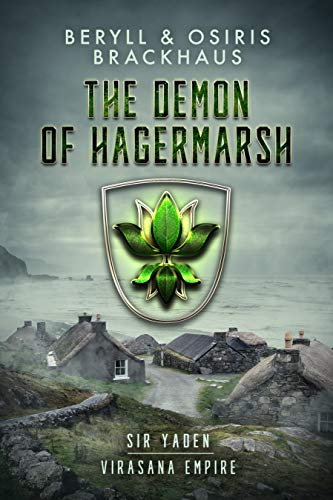 "The authors have created an interesting society with their detailed world-building, and their fully realised MCs and supporting cast made me care enough about them to want to know what happens to them, their hopes and dreams as this series develops. The plot was interesting and I liked the way characters' motivations were slowly revealed as the story progressed. Looking forward to the next book."

"I loved the way this story juxtaposed fantasy tropes with modernity.  The world building is fabulous and detailed.  The characters also come with a rich history, and I liked how the backstory unfolded at the same time as the present storyline.  The writing style made for smooth reading, and I thought having the present in 3rd POV, and the backstory/history in 1st was a cool way of distinguishing between the two, and exploring the two main characters through the eyes of the other. "

“The Emperor cares for each and every one of his subjects.”

Many consider the catchphrase of the imperial Lotus Knights to be nothing more but well-polished propaganda, but for Yaden, it is a way of life.

A young Lotus Knight himself, his first mission in service of the Emperor sends him to the remote village of Hagermarsh, a suspiciously friendly place on a planet known for its inhospitable people. But how to uncover a demonist coven when nothing bad ever happens?
Getting to know the villagers only complicates things - the motherly fishmonger surely isn’t a demonist. Nor the gruff leader of the local militia. And definitely not the cute baker from across the street.

Come discover a dazzling, hopeful universe of knights and monsters, of psions, aliens and ancient deities! The Demon of Hagermarsh is the first book of ‘Sir Yaden’, an epic SF saga of grand adventure, romance, bromance and family, set in the multi-faceted Virasana Empire. It is a romantic adventure and can be read as a standalone.

This journal is friends only. This entry was originally posted at https://reviews-and-ramblings.dreamwidth.org/5282173.html. If you are not friends on this journal, Please comment there using OpenID. 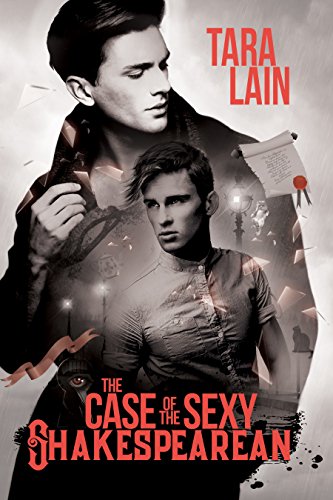 The Case of the Sexy Shakespearean (The Middlemark Mysteries Book 1)

"I enjoyed this cozy mystery. The MCs are likeable, and are supported by an interesting supporting cast amongst a littering of obnoxious individuals. I loved the cats who are characters in their own right. The setting felt real and was easy to imagine. The plot had a few red herrings, and clever twists. I’m hoping this is the first in a series."

"Extremely entertaining with a plot twist at the end that I didn’t see coming.  The main characters were endearing and I loved the subtle message about the stutter’s origin and why it lessens near the end.  This feels like a book with both prequels (I want more about Ramon Randell and other cases solved by the professor) and sequels (what other mysteries does our dynamic duo solve?"

Dr. Llewellyn Lewis leads a double life, as both an awkward but distinguished history professor and the more flamboyant Ramon Rondell, infamous writer of sensational historical theories. It’s Ramon who first sets eyes on a gorgeous young man dancing in a club, but Llewellyn who meets teaching assistant Blaise Arthur formally at an event held for wealthy socialite Anne de Vere, descendant of Edward de Vere, seventeenth Earl of Oxford—who some believe was the real Shakespeare. Anne wants Llewellyn to prove that claim, even though many have tried and failed. And she’s willing to offer a hefty donation to the university if he succeeds.

It also means a chance for Llewellyn to get to know Blaise much better.

Not everyone thinks Llewellyn should take the case—or the money. Between feuding siblings, rival patrons, jealous colleagues, and greedy administrators, almost anyone could be trying to thwart his work… and one of them is willing to kill to do it.

When Anne de Vere turns up dead, the police believe Blaise is the murderer. Only the shy, stuttering professor who has won his heart can prove otherwise….

This journal is friends only. This entry was originally posted at https://reviews-and-ramblings.dreamwidth.org/5244971.html. If you are not friends on this journal, Please comment there using OpenID. 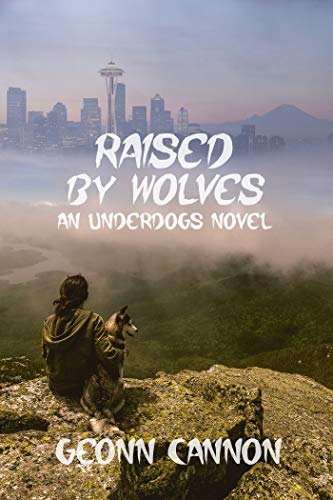 " This is the eighth book in a series, yet in addition to laying out a cracking good mystery, the author takes the time to subtly fill in the characters’ pasts and important events from earlier books, so that at no time did I feel I was missing something. This is difficult to do, and not a lot of writers bother to do it. This alone deserves recognition. But there’s a lot more to enjoy here, as well. The main characters’ relationship, for one thing — eight books old, but still fresh, loving, and interesting. The writing is crisp and clear. And the plot is structured well, too. Great job, author! I’ll be looking forward to starting the series from the beginning."

The wolf has returned.

Ari is reluctant when she's summoned to Seattle's Millionaire's Row by Vivian Burroughs, given their history with rich clients, but the money is too good to refuse. Vivian reveals that she's dying, and fears one of her four children might attempt to steal a valuable tapestry hanging in her house. She plans to lock the room where it hangs and leave the key with Ari until the will is read. The job seems simple enough until the day arrives and the room is unlocked to reveal the tapestry has vanished. Now Ari has to stay on the case to figure out not only which of the heirs is responsible for taking the artwork, but how they managed to get it out of a locked room.

With time running out before all her suspects leave town, Ari has to figure out who took the priceless tapestry and how they did it, while also facing an outside force which may do the unthinkable and come between her and Dale.

This journal is friends only. This entry was originally posted at https://reviews-and-ramblings.dreamwidth.org/5289647.html. If you are not friends on this journal, Please comment there using OpenID.